Taste is, of course, highly subjective: 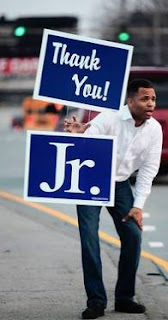 Federal authorities allege that Jesse Jackson used campaign funds to purchase a $43,350 men’s gold-plated Rolex watch, $5,150 worth of fur capes and parkas, and $9,588 in children’s furniture. The purchases were made between 2007 and 2009, according to the criminal information, which authorities noted is not evidence of guilt.

Other expenditures listed by prosecutors include $10,105 on Bruce Lee memorabilia, $11,130 on Martin Luther King memorabilila [sic] and $22,700 on Michael Jackson items, including $4,600 for a "Michael Jackson fedora."

The government also alleged that Jesse Jackson made false statements to the House of Representatives because he did not report approximately $28,500 in loans and gifts he received.

As they say, the nut doesn't fall far from the tree.

What saddens me is that even after all his bad stuff was pretty much well known in 2012, Jesse Jackson, Jr. was STILL re-elected with 63% of the vote and beat his Republican challenger by a whopping 40 points. (The Republican got 23% and an independent got 13%.)

That's Chicago -- and also Manhattan, where I once ran for borough president. Is it any wonder why Charles Rangel keeps getting re-elected in Manhattan? What does it take to open peoples minds that they shouldn't keep re-electing losers with a "D" after their names?

Plus, the biased press is covering up this story. (Tell Newsbusters for me.) I watch MSNBC for opposition research purposes, and there hasn't been a single prime time mention of Jesse Jackson Jr. I believe that the usual MSM jokers aren't running the story, either, or barely mentioning it.

Maybe, just maybe, if Jessie Jackson, Jr. PAUSED TO DRINK A GLASS OF WATER, well then, Rachel Maddow wouid have something to tell her viewers.

The nut may not fall far from the tree, but jr was never have the shyster or con artist that his old man was/is.