The hypocrisy, it burns: 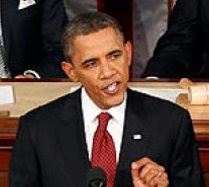 President Barack Obama and Democrat cronies are packing tonight’s State of the Union address in the House Chambers with crime victims in an attempt to push the administration’s gun ban agenda, the Citizens Committee for the Right to Keep and Bear Arms said today.

“President Obama has been claiming to want a balanced approach to solving the nation’s gun violence problem,” noted CCRKBA Chairman Alan Gottlieb. “If that was true, he would have invited people who have defended themselves with firearms to be in the audience tonight as well. Instead, anti-gun Democrats are packing the House.

Inexplicably, no late-term aborted fetuses were invited to the State of the Union address by the president.

Why would any president use this occasion to call for Civil War?