GRASSROOTS: Progressive gun-control policies so popular they have to pay people to rabble-rouse

Consider how hard it must be to operate a progressive "grassroots" organization. Your policies have failed for decades. Your current positions -- like trying to ram gun-control down Americans' throats -- are wildly unpopular.

So unpopular, in fact, that you have to pay people to take your positions. 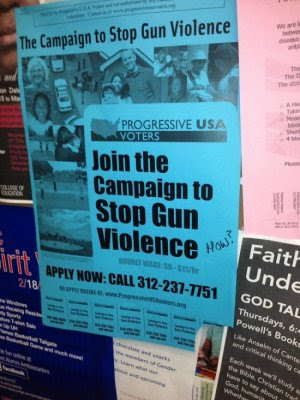 The liberal organization Progressive USA Voters, which is housed in the same progressive Denver office building as a chapter of the infamous left-wing astroturf group ProgressNow, is offering an hourly wage of between $9 and $11 to join its gun-control campaign in Chicago, according to a flyer that was photographed and posted to Reddit Friday... “Join the Campaign to Stop Gun Violence” reads the flyer, which also notes, “Hourly Wage: $9-11/hr.”

...Progressive USA Voters is specifically focused on the April 2013 special election for Jesse Jackson Jr.’s vacated House seat in Illinois’ Second Congressional District. The group is targeting Democratic primary candidate Debbie Halvorson, who accepted more than $10,000 from the National Rifle Association, according to the Progressive USA Voters website... Halvorson is running against former state representative Robin Kelly, who has received the endorsement of New York Mayor Michael Bloomberg’s super PAC, Independence USA, which is also attacking Halverson on the issue of Gun Control.

...Progressive USA Voters is a project of Progressive USA, which claims to “advocate for sensible policy solutions, hold our nation’s elected officials accountable for their actions and take head-on the flawed policies and hypocrisy of the radical right.” The group does not list its staff or directors on its website, and does not disclose its donors to the Federal Election Commission.

Progressive USA is based in Denver, Colorado, at 1536 Wynkoop Street, according to its Facebook page. The building at 1536 Wynkoop Street is owned by the Alliance for Sustainable Colorado. The building, known as the “Alliance Center,” houses various nonprofit organizations, including ProgressNow Colorado, a chapter of the notorious national left-wing astroturf organization ProgressNow.

It's important to remember what the word "progressive" really means. Historically speaking, the Progressive movement is indistinguishable from Communism.

These days, the entire Lefist movement has been so radicalized, it's been built on money, payoffs and astroturf, not true public support.

Whenever you hear the word "progressive", pronounce it com·mu·nist.

I think we all know what to call people who demand to be paid for taking a position. ;)