According to the Heritage Foundation, the Budget Sequester "cuts the DHS off at the knees."

... the DHS will be hit hard if the sequestration is allowed to proceed as planned. Some of the areas highlighted are: 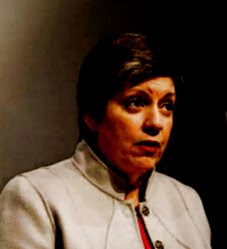 • The TSA would have to furlough front-line screening personnel at airports, likely causing significant delays at major airports throughout the U.S.

• The Coast Guard would have to reduce air and surface operations by 25 percent, put off maintenance of its aging fleet, and delay moving into its new headquarters.

• The Department’s Science and Technology Directorate would be forced to cut major projects entirely, including research on protecting the U.S. electrical grid, and drastically slash others.

• Funding to the National Cybersecurity Protection System would be significantly reduced.

Maybe DHS could sell the couple billion of rounds of ammo it's stockpiled into the private market which so desperately needs it.

That way all of the airport crotch-grabbing and Southern border non-enforcing can continue apace!

DHS? This is one immense POS that should be shuttered totally and made illegal; and the acronym "DHS" should also be forbidden to be uttered or written by Republicans or democratics.

This ammunition buying has really irritated the hell out of me.

Buying that much ammo was nothing more than a complete and total waste. It will never be used and will end up as huge piles of rusted and corroded junk.

I would love for a reporter to ask Obama, or big-mouth Biden, "If there is such a surplus of revenue that we can afford tons of ammo, so much that it will impossible to use, then why shouldn't the Sequestration proceed?".

I would love to hear the answer to that.

Every time I see a story about a million tax dollars lost, stolen or given away, I get the image of all the income taxes paid by all the people in my neighborhood put in a pile and burned.Real money earned by real people for work done and then wasted.

The Coast Guard Headquarters building is a huge waste of money. The Coast Guard did not want it, they are forced to take it, pay double the rent they are now paying, for less parking, no public transportation, and the privelege of commutting into the highest crime rated area of DC.

They are building a 3000 space parking garage, but the Coast Guard can only access 980 spaces for over 3000 personnel. Taking up that space will be government vehicles, visitor parking, etc... basically, the average worker 'is forbidden' to drive to work. The DC overlords have ruled that the Coast Guard is 'forbidden' to park on public roads. They suggest they all ride bicycles.

Again, there is no public transportation. It is a high crime area.

2000+ parking spaces will remain empty. The averages person's commute will increase by 1/2 hour or more.