FORGET THE INDOCTRINATION: Hitler and Mussolini were "progressives" and men of the left

Daniel Hannan cuts through the disinformation routinely spewed by the pundit class to reveal the true historical nature of fascism, albeit as it pertains to British politics. The lessons, however, are applicable here as well. 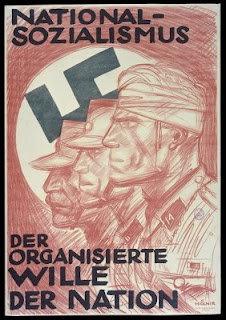 Listen to Democrats like the unhinged progressive Tom Harkin, who believes income and wealth needs to be "reallocated" -- by force, presumably -- and you can hear the echoes of fascists past.

at 11:10 AM
Email ThisBlogThis!Share to TwitterShare to FacebookShare to Pinterest
Labels: Democrats, extremism, Harkin, Obama, World

Hitler was no libertarian, that's for sure

Yes, old news to thinking people. But I have given up on the idea that a lot of our fellow citizens actually know how to think logically. This has been purposefully degraded by Gramsci's long march in our institutions. We must be simple and diresct. Do not ever let this lie continue in our prescence. The progressive leaders mostly know this is a huge lie, and they love pushing it. Conservatives have always been at a disadvantage in that we have manners, and our political views are basically the Golden Rule type of things. We desire to be left alone by government. Progressive wield government as their club. Lindsey Graham praised Ted Cruz, then commented " but can he do a deal". Well what if no part of the progressive agenda is compatible with liberty? We have done the passive Get along approach to long. And they eat our lunch and blame us for it. The most important thing is to know the rules, and then play by them. Shove back. Explain the truth. Do not accept their premise, make the voters accept yours.

Sorry, for the grammatical errors, typing on an iphone. While driving and eating. And shooting. Conservative stuff.

"Sorry, for the grammatical errors, typing on an iphone. While driving and eating. And shooting. Conservative stuff."

"But I have given up on the idea that a lot of our fellow citizens actually know how to think logically. This has been purposefully degraded by Gramsci's long march in our institutions."

What he said. You aren't preaching to the choir. You are preaching to caged animals. They have no comprehension of reality anymore.

One particularly vile individual, Karl Astel -- upstanding president of Jena University, poisonous anti-Semite, euthanasia fanatic, SS officer, war criminal and tobacco-free Germany enthusiast -- liked to walk up to smokers and tear cigarettes from their unsuspecting mouths. (He committed suicide when the war ended, more through disappointment than fear of hanging.) It comes as little surprise to discover that the phrase "passive smoking" (Passivrauchen) was coined not by contemporary American admen, but by Fritz Lickint, the author of the magisterial 1100-page Tabak und Organismus ("Tobacco and the Organism"), which was produced in collaboration with the German AntiTobacco League.