Lindsey Graham fetches a pair of pliers and a blowtorch, vows to get all medieval on Chuck Hagel and John Brennan

While I haven't exactly been Lindsey Graham's biggest fan over the last six or so years, I have to give him credit for fighting back against two of the most radical nominees in recent memory. 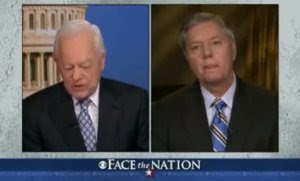 Lindsey Graham said today that he didn’t want to see Chuck Hagel and John Brennan in office before the Obama administration gave more answers on Benghazi.

“I don’t think we should allow Brennan to go forward for the CIA directorship, Hagel to be confirmed to secretary of defense, until the White House gives us an accounting,” Graham said on Face the Nation. “Did the president ever pick up the phone and call anyone in the Libyan government to help these folks? What did the president do?”

In response to Bob Schieffer’s question about whether he would put a hold on the nominations if he didn’t get answers from the White House, Graham responded, “Yes, I’m going to ask my colleagues, just like they did with John Bolton, Joe Biden said no confirmation without information.”

Given credible reports that Chuck Hagel received funds from a Hamas-linked terror group and John Brennan recently converted to Islam, substantial vetting of this pair is required.

You shouldn't get to surprised, it's re-election time for Lindsey Lohan. It's the normal life cycle for LL, it always happens at the end of his current term.