I wonder what the overstuffed radical named "Richard Windsor" thinks of this innovation?

New technological advances may make it possible in the near future to engineer a coal-powered car so clean that it produces nearly no polluting emissions, including carbon dioxide... 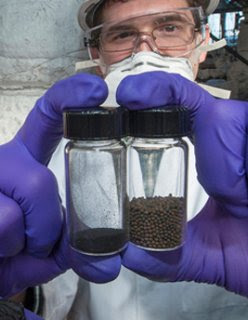 “There are many exciting possibilities for the clean coal technology,” says Liang-Shih Fan, a chemical engineer and director of Ohio State University’s Clean Coal Research Laboratory. “We found a way to release the heat from coal without burning it. This could be applicable for many industries.”

Fan last week disclosed that he had discovered a way to get the energy out of coal without burning it, using iron-oxide pellets as an oxygen source, and contain the reaction in a small chamber from which pollutants cannot escape. The only waste product would be water and solid coal ash -- no greenhouse gases. As an added benefit, the metal from the iron-oxide is recyclable.

The energy creation process is commonly known as “oxidation,” and is the chemical combination of a substance with oxygen. The use of the process is envisioned by Fan and his colleagues as a replacement for old-fashioned coal power plants, which spew greenhouse gases.

If the technology can be successfully miniaturized enough to fit into cars, the fueling infrastructure needed to service them would not be all that difficult to develop, experts say.

My question, above, was rhetorical, of course. We know what "Richard Windsor" and her ilk think of anything that empowers the individual and freedom of movement: they despise it.

For these sixties-retread radicals, it's not about carbon dioxide, or pollution, or global warming, or climate change, or whatever they're calling their religion these days. It's about control over you, the individual. Restricting your movement, controlling the private sector, and setting industrial policy.

As Mark Levin often says, "Green is the new Red."