WASHINGTON, DC - An exclusive analysis by Cub Reporter Biff Spackle reveals that members of the military conscripted by First Lady Michelle Obama for her Oscar appearance were blinking coded messages.

Three of the four military personnel were, according to a computer-based analysis, using Morse code to signal the public that they were being forced to appear as props against their will. 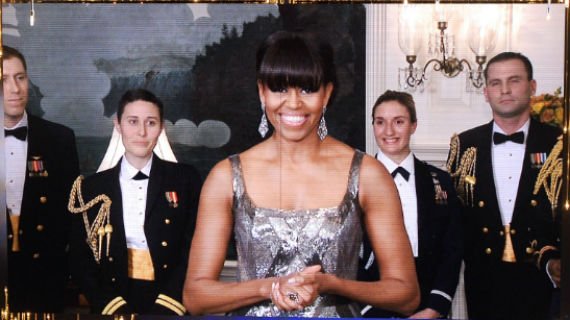 This analysis can exclusively reveal the following:

The use of military members for the First Lady's commercial appearance raised the specter of impropriety according to Beltway insiders.

Longtime Hollywood insider Sparkles Malloy observed that, "if the Obamas really want to break the record for most television appearances, they ought to at least move to Los Angeles."

They don't call her Mooshelle for nothing. That hair flop looks like a cow tongue, and for the life of me I don't know why black peole need to cultivate white people's hair. Barry's beard is one repulsive bit.

Do you have a video along with a morse code chart so we can see this for ourselves? The internet is full of made up articles... no harm in confirming.

Dude is a frigging joke. As in NOT FUCKING REAL.

Whoever wrote this must not have anything else better to do with their time. Find something more constructive to do with you time then to print garbage like this. Shame on you!

Some correctly guessed this story was a satire piece, but what I found most telling is the fact that others who didn't click on it automatically assumed (via the headline) it was true. That alone speaks to how successful Obama has been in pushing the boundaries of what's acceptable. Very disturbing in light of Obama's history of outrageous over-the-top campaign prop photo-ops.
http://networkedblogs.com/x76Q9