Where will the global race to debase currencies end? A diagram known as "Exter's Pyramid" offers us a hint:

...Before we delve into why backwardation in gold has some very unique and stark implications, let’s first take a moment to understand exactly what backwardation is.

...Backwardation is the condition where the spot price is higher than the forward price. Backwardation often exists in perishable commodities, right before the harvest. This happens because even though demand is constant throughout the year for a commodity like wheat, the harvest only happens once a year. If you demand delivery right before the harvest, it will be more expensive than taking delivery one month later, after all the grain silos are full. Backwardation is usually a fleeting phenomenon, occurring only when a particular commodity is in short supply and there is great demand for immediate delivery, not in the future. 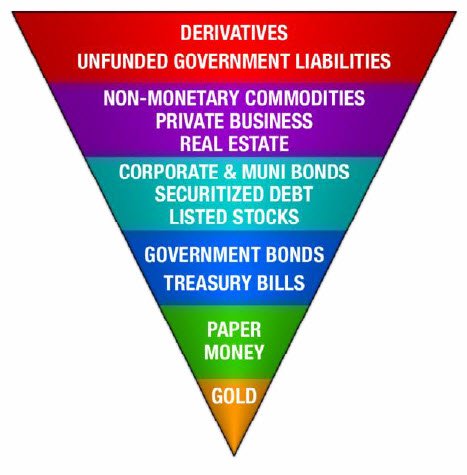 ...[But] gold is a unique commodity in that it is not consumed... it’s hoarded. Estimates of world gold supplies are north of 170,000 tons. So what would backwardation mean in the gold market? ...if and when we see gold in backwardation, it should be considered something like a fire alarm for the system. Something serious is happening. Investors would be rejecting what should be a “risk free” profit opportunity. We would like to suggest two (not mutually exclusive) causes: 1) the threat of counterparty failure and/or 2) loss of confidence in the $US Dollar.

The first implication of gold in backwardation is straightforward and easy to understand. The market is pricing in significant counterparty risk of failure to deliver gold in the future... [We] believe the second implication for gold backwardation is a collapse in confidence in the $US Dollar itself.

...So what would extended or permanent backwardation imply? According to Prof Antal Fekete, “gold going into permanent backwardation means that gold is no longer for sale at any price, whether it is quoted in dollars, yens, euros, or Swiss francs. The situation is exactly the same as is has been for years: gold is not for sale at any price quoted in Zimbabwe currency, however high the quote is. To put it differently, all offers to sell gold are being withdrawn, whether it concerns newly mined gold, scrap gold, bullion or coined gold.”

...For physical gold owners searching for clues to tightness and demand in the physical market, they would be wise to keep a sharp eye on these metrics. It is our belief that this is happening, right now. Money is moving down Exter’s pyramid and while the final denouement may be days, weeks, months or years off, we are certain it would be preferable to be years early as opposed to a day late.

But don't worry, folks. Ben Bernanke's got this.

Imagine the effect of Obama issuing an executive order banning the owning of gold. I don't think people would meekly obey as they did in 1933.

Don't count on that, Bones. The "people" voted this bozo back in, didn't they?

The American Revolution involved less than 10% of the American population. Today, that 10% could be considered the largest army the world has ever seen. That scares the hell out of the left.

Bones, I think the percent of patriots who took up arms against the crowd was 3 percent hence the threeper movement and the Citadel Project in Idaho.