5. Homeland (Showtime) - If canvassed during its first year, the terrorism thriller Homeland would have ranked far higher on my list. But the season-ending episode in year one, featuring an imminent suicide bombing by Nicholas Brody thwarted with a last-minute "Oh, Daddy, please don't blow yourself up" phone call, jumped the shark for me. I still watch it, though it doesn't hold quite the same appeal. 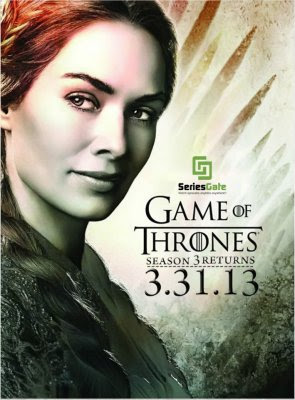 4. Boardwalk Empire (HBO) - I'll admit this one grew slowly on me. As a huge fan of the Sopranos, I was honestly figuring this for a cheesy, twenties-era retread. But it's far more complex and infinitely more interesting than just a mob thriller. Rooted in historical fact, albeit with a significant helping of artistic license, corporate scions like Andrew Carnegie as well as rising mobsters like Al Capone and Lucky Luciano participate in the ascent of Nucky Thompson's prohibition-era Atlantic City.

3. Banshee (Cinemax) - New this year, Banshee features an ex-felon (the aptly named Lucas Hood) who can't seem to stay out of trouble. As he searches for his erstwhile (and beautiful) crime partner, whom he last saw holding millions in diamonds from their final heist, he becomes involved in an incident that offers him the opportunity to switch identities. He assumes the persona of the new sheriff of Banshee, Pennsylvania, an up-and-coming casino town controlled by a very organized crime syndicate.

2. Game of Thrones (HBO) - I think of this series as Tolkien for adults, with violence and sex on a scale that would have made poor old J.R.R. tremble with fear. A realm that once consisted of seven distinct kingdoms, Westeros begins to shatter when the King -- Robert Targaryen -- is killed during a hunting accident. Or was it murder? The nice thing about GoT is that there are no good and evil characters; it's more like reality. I mean, there's pure evil and only somewhat evil. The overarching protagonists -- the Stark clan -- are a family shattered as Westeros descends into war and chaos. Additional note: the books are excellent and the casting and writing of the television adaptation couldn't be more perfect.

1. Dexter (Showtime) - Yes, he's a serial killer. But he's a serial killer with a heart of gold. Miami blood spatter analyst Dexter Morgan reviews no shortage of crime scenes. And as the son of a cop, he knows how forensics can trap killers. But when the justice system breaks down, Morgan's code demands that he levy the ultimate punishment. And unlike GoT, the Dexter series of books are completely divorced from the series -- and that's a good thing.

Oh, it's true: I try to avoid all of the alphabet channels for obvious reasons. Update: And, no, I'm not paying for these channels. They were included free for six months as part of an incentive to sign up - and I spent much of the Christmas holiday watching entire seasons.

at 6:57 PM
Email ThisBlogThis!Share to TwitterShare to FacebookShare to Pinterest
Labels: Hollywood

I am so looking forward to this season's Game of Thrones.

Season 3 will be a mind-blower!

I tried watching the "hey, everybody's bisexual now" show on the skiffy channel. The show's called Lost Girl. I started watching it, ostensibly for the bit of sword/sorcery type fantasy element.

Of course, the K~Missus says I only watch for the side-boob and rear-end shots, and hot chicks (nearly hot, anyway) kissing. On this subject deponent sayeth no more.

I told the K~Missus that the show was conditioning the audience for the inevitable guy-on-guy scene, and sure enough, several shows into season three they feature two guys making out, in the background, in a pleasure palace of sorts. They ease into it by making it look like it's really a trio scene with some chick.

It's gotten so predictable it's boring.

It's Andrew Mellon, not Andrew Carnegie, on Boardwalk Empire.

I don't get any of the premium channels (by choice). I watch football in season and my one guilty pleasure, NCIS.

HBO is an enemy to me, they stand against our country and ridicule my values. I have withdrawn from all government media as much as possible. Seriously, why would a conservative pay for that crap. Yes I realize some fo the shows ar good. So What.

So you're all admitting that you are still pouring money into the leftist media machine that elected and reelected the current commie-in-chief?
Yet you complain about the liberal bias, obfuscations, outright lies and cultural corruption being produced with your money?
I beat our TV set to bits with a baseball bat back in 2009. I refuse to buy the rope they want to hang me with.

So you're all admitting that you are still pouring money into the leftist media machine that elected and reelected the current commie-in-chief?

Yet you complain about the liberal bias, obfuscations, outright lies and cultural corruption being produced with your money?

Amen. These are the people actively assisting in the destruction of our nation. I will not support them financially.

For any show that might offer the slightest redeeming quality on the premium channels, there's 10 trying to tear us down.

Just about through "Farscape."

homeland - interesting to see where season 3 goes, will brody still be
on it? if so, where will he hide out? middle east?
justified - season 4 continues strong!
the following
longmire
shameless
(dexter) no longer great, playin out the string

Breaking Bad. The only reason I can assume it's not on your list is you don't get AMC.

I'm embarrassed to admit I've gotten hooked on Supernatural, a show aimed at people half my age. I'm a big fan of Breaking Bad, but that won't be back for months.

I use Netflix for streaming video. Looking for another series to get into, but few of the ones mentioned here are available.