With Congressional approval hovering slightly below that of lice and John Wayne Gacy, this takes real chutzpah.

Pelosi: Pay Cut for Congress Beneath Their Dignity

If Democrats in Congress fail to prevent across-the-board spending cuts (AKA ‘the sequester’) their own $174,000 salary gets trimmed too, and Rep. Nancy Pelosi is offended by the notion.

“I don’t think we should do it; I think we should respect the work we do,” Pelosi told reporters in the Capitol. “I think it’s necessary for us to have the dignity of the job that we have rewarded.” 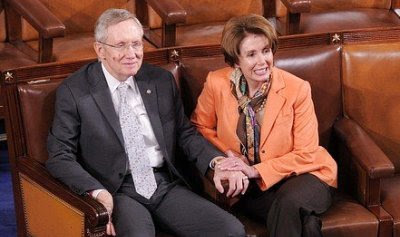 I’m confident we can work out a compromise so that Mrs. Pelosi and colleagues aren’t summarily stripped of their dignity. In fact, as representatives of the people, members of Congress ought to share in the blessings of the economic conditions they have fostered.

So, here are two suggestions:

1) Peg Congressional pay changes to changes in the median household income — down about 8.24% since 2007 — putting their pay at about $159,663. Of course, if they really wanted to identify with the people, we could set their pay AT the median household level, a cut of roughly $110,000. Members who serve inner-city districts could have their’s set to local rates.

2) If the first option also seems below their dignity, they could be rewarded according to their abilities, by putting them on straight commission, so their income increases with every dime they cut from the federal debt. It’s a ground-floor opportunity, and the sky’s the limit (actually, at $16.5 trillion in debt, the limit stretches above the sky).

I sometimes wonder whether Nancy Pelosi has facelift poisoning -- a term I just coined -- such that her brain cells are being starved of oxygen.

And aside from Pelosi, for Democrats in general, the question is often raised: is it ignorance or malice?

The correct answer is: both.

Oh, man, that last suggestion about working on commission... they would be fools to pass that up. It could make them all billionaires.

Hey, maybe we could offer a bounty of sorts. A $2Mil bonus to any sitting congress member who manages to actually get a cut (a real cut, not a reduction in rate of increase) in some government program.

Even a small one, like real cuts in grants for studies related to skin creams for the makeup industry.

Facelift poisoning...LOL. All the Libs have a gene problem. The delusional ignorance is simply mind boggling.

Working on commission or incentives. If every government department had a plan like that, for even mid-level managers, spending would be cut 1/3 in 6 months.

I laughed out loud when I got to your comment on Pelosi and facelift poisoning! Thanks for the comic relief.

I wonder why we can't force them to take pay cuts? After all we're their boss Let's get something started. What do you say?