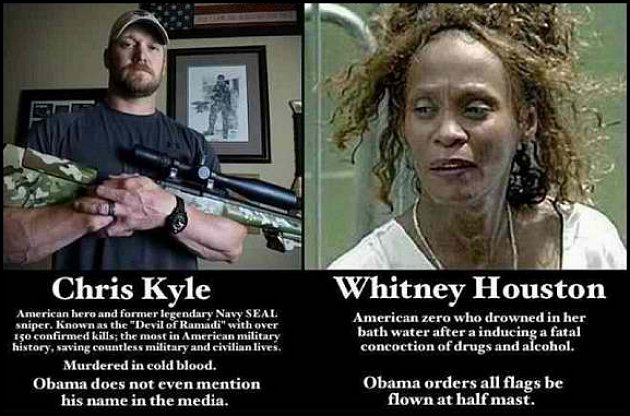 Former Navy Seal Chris Kyle, who was killed at a Texas gun range on February 8, was laid to rest Tuesday at the Texas State Cemetery. On Monday, 7,000 people attended a memorial service in his honor at the Cowboys Stadium.

Many people are saying Kyle was the deadliest sniper in history, and he was known as “the legend” to his friends, and the “Devil of Ramadi” to his (and our) enemies. He was the author of the book, “American Sniper: The Autobiography of the Most Lethal Sniper in US Military History.”

Kyle and his family have given so much for our country, as have so many other heroes before them; and yet, President Obama failed to mention him in his State of the Union last night, the same day as his funeral.

Sarah Palin, however, recognized his sacrifice on the morning of the memorial service, which she attended with her husband...

We salute you, Chris Kyle. We salute you and thank you. May God bless you and your family.

Yeah, Love that Sarah stepped up within minutes.

I love the posts here but I can't find where Obama ordered the flags to be flown at half mast. My Dad always said not to believe anything you read or hear and only half of what you see. I always verify and usually don't have a problem. Can anyone help me out with this one?

I have seen articles denouncing the NJ Governor lowered the flags over Houston's death. NOt too surprising with the other RINO like behavior of Chris Christie.

Sarah Palin posted this on Facebook: "I find it sad to see that flags aren’t flying at half staff﻿ for this American hero. We’re surrounded today by American patriots here in Texas – by Chris’ fellow veterans and active duty warriors. In honor of them, I hope our commander in chief pays his respects in some gesture of condolence for their comrade in arms who sacrificed so much to keep him and all of us safe."

YOU PEOPLE ARE NUTS.....FLAGS WERE ORDERED FLOWN AT HALF STAFF FOR WHITNEY HOUSTON BY GOV CHRIS CHRISTIE,ONLY IN NJ. GOV RICK PERRY SHOULD HAVE GIVEN THE ORDER IN THIS CASE......BUT AS USUAL YOU DUM*AZZ*ES ALWAYS GOT TO BRING UP OBAMA.