What's the price for getting your own Solyndra up and running? Apparently, around $500,000

If you're a crony capitalist interested in getting a piece of the Beltway action, the going price for access to the Obama administration appears to be a minimum of $500,000. That would be half a million American dollars you'll want to launder through the perpetual Obama campaign.

Unlike a presidential campaign, Organizing for Action has been set up as a tax-exempt “social welfare group.” That means it is not bound by federal contribution limits, laws that bar White House officials from soliciting contributions, or the stringent reporting requirements for campaigns. In their place, the new group will self-regulate. 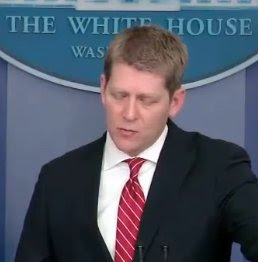 Officials said it would voluntarily disclose the names of large donors every few months and would not ask administration personnel to solicit money, though Obama aides will probably appear at some events.

...Giving or raising $500,000 or more puts donors on a national advisory board for Mr. Obama’s group and the privilege of attending quarterly meetings with the president, along with other meetings at the White House. Moreover, the new cash demands on Mr. Obama’s top donors and bundlers come as many of them are angling for appointments to administration jobs or ambassadorships.

“It just smells,” said Bob Edgar, the president of Common Cause, which advocates tighter regulation of campaign money. “The president is setting a very bad model setting up this organization.”

When questioned about this nefarious construct by a newly invigorated, post-election press corps, Jay Carney recited a stanza of "Humina Humina Humina."

...White House spokesman Jay Carney fielded real questions from the White House Press Corps today, if you can believe it... I think the corps is angry that they got shut out of the golfing trip last week. They asked if a $500,000 check to Organizing for Action bought special access to the president. Carney shuffled his feet.

We have written before about the new charitable organization associated with President Obama, which was launched over inauguration weekend. We reported that OFA (as it is being called) appears to be essentially a vehicle for businesses and wealthy individuals who seek to curry favor with the administration. If one wants to get in in front of the President one had better be ready to write a big check to the organization. It’s all tax deductible of course.

This sort of scandalous behavior is routine for the Obama administration. Remember, for example, that 80 percent of the Department of Energy's "Green Energy" loans went to Obama's campaign backers.

When the full history of the Obama administration is written, it will make the Teapot Dome Scandal look like a case of shoplifting.