Today the National Journal and its editor-in-chief Ron Fournier -- if that is his real name -- achieved the pinnacle of self-beclownment. The setup: Fournier, in a soporific commentary on the White House's threats against legendary journalist Bob Woodward, described his own brush with a nasty Obama senior staffer. Fournier says he's befuddled because...

I had a great relationship with Clinton’s communications team, less so with President Bush's press shop, and now -- for the first time in my career -- I told a public servant to essentially buzz off.

This can’t be what Obama wants. He must not know how thin-skinned and close-minded his staff can be to criticism.

Is Fournier a clueless hack or just a touchingly naive drone? I ask because Obama mentions his critics by name (Sean Hannity and Americans For Prosperity, come to mind) and levies punishments against the press on a routine basis. 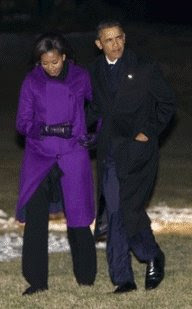 This is a fascist mind-set, in no uncertain terms.

We need a new slogan for the media. "Speak truth to power" doesn't quite describe what they do nowadays does it? Repeat Truth from Power is more like it.

As I wrote in 2010, "unlike Tricky Dick Nixon, Barack Obama wears his Enemies List on his sleeve."

And for Ron Fournier to pretend to overlook all of the evidence of Obama's thin-skinned nature illustrates how much of a joke he is. He's a hack. A loser. And so is The National Journal, which is fit only for catching hair-clippings at the barber shop. That is, if you don't have a copy of The New York Times handy.

My goodness, take a close look at that picture of Mooch and Barry. If she is not wearing a pair of Cleavers I will send you a hundred bucks. She's hung like a bull.