Another lovely young lady was murdered on the streets of Chicago just hours after President Obama's speech on gun control. Ironically, Chicago is the gun control capital of the U.S.; its strict laws on gun ownership and possession are so onerous they have been declared unconstitutional. And it is only because law-abiding citizens honor the ban that the city has been transformed into a human hunting preserve. 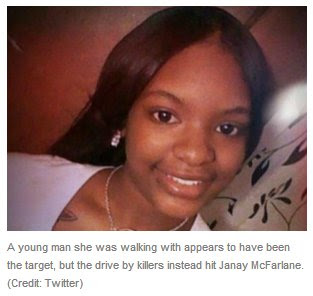 Another Chicago student shot and killed just hours after President Obama’s speech on gun violence, a speech her sister attended.

“The next thing I knew I got a call and they said my baby was dead. And she was shot in the head,” said Angela Blakely, the victim’s mother... A young man she was walking with appears to have been the target, but the drive by killers instead hit Janay...

...Janay attended Hyde Park Career Academy where President Obama spoke yesterday for three years before transferring to an alternative school after she became pregnant a year ago. But her younger sister Destiny still attends Hyde Park and was in the audience standing right behind the President as he decried the violence that claimed the life of Hadiya Pendleton and so many other young Chicagoans. Destiny was too distraught to talk about her big sister...

Instead of pursuing the drug cartels and armed gangs that are roaming the inner city like a post-Apocalyptic, Mad Max-style wasteland, mayor Rahm Emanuel and police chief Garry McCarthy are pursuing innocent gun owners and demonizing law-abiding citizens.

Every reporter who interviews the president, the mayor, or the police chief should repeatedly ask the question: why isn't gun control working in Chicago?

And if they lay the blame on neighboring cities and states, ask why those areas are infinitely safer than Chicago.

at 11:28 AM
Email ThisBlogThis!Share to TwitterShare to FacebookShare to Pinterest
Labels: Crime, Democrats, extremism, Firearms, Obama