One of the most disingenuous uses of statistics has come with the use of the figure "47 million" when referring to the number of people without health insurance. 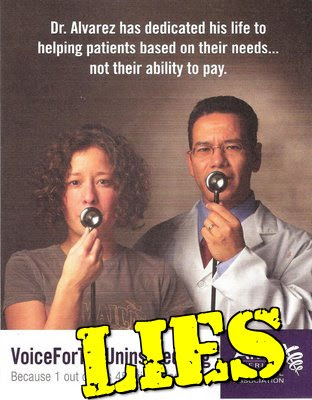 By continuing to pound the number "47 million", advocates of a single-payer system are implementing Alinsky's rules in order to affect change. But their number is specious.

Let's break down the 47 million:

During her campaign for President, Hillary Clinton admitted in questioning that, of the 47 million, at least 25 percent could afford health insurance but choose not to purchase it (those with a household income of more than $75,000 a year). I believe the number to be slightly higher, closer to 30 percent, but let's use Clinton's number. That's 12 million.

Let's count illegal aliens. Believe it or not, illlegals are counted in this number, however, statistical models vary and have ranged from 5 to 12 million. Let's take the middle. 8 million.

Then there are those who are already eligible for government programs but not participating. That number is estimated at 12 to 16 million. Let's take 12 million.

Another group of people are those who self-fund. These are people with the financial resources to handle high medical claims. That number is estimated at 1 to 2 million. We'll take one for arguments sake.

Then there are those who are between jobs. When people are fired or leave a job, they can opt for COBRA (an extension of their health benefits under the Consolidated Omnibus Reconciliation Act, I believe 1996). When electing COBRA coverage, the premium is covered by the member. When someone is between jobs, or have obtained a job and have to wait 90 days for coverage, the government counts you as not having health insurance. That number is estimated at 5 million. 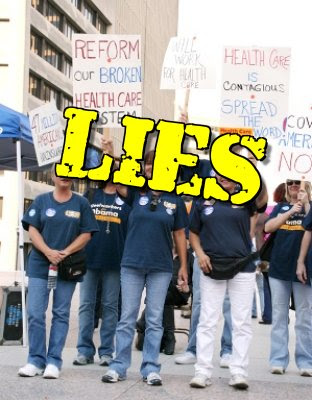 These are not exact figures, and may vary, but they are pretty widely accepted.

Add the numbers up and you get 38 million. That leaves 9 million without coverage (although they really do have coverage since the federal government, along with the states, administer medicaid and charity care).

So the real number of uninsured is 8-10 million. There are 300 million Americans.

So we want to break the system because 1 out of 30 people cannot afford coverage. That's absurd.

One last point: When politicians control your health care, they will politicize it, and use it to get elected. More on that later.

However, Obama has shown all Americans that he has already politicized the process. When he called all the health care providers and carriers together to promise savings in the system, he exempted lawyers. They were never called to the table. Tort reform is directly tied to the reduction of costs in the system (consider, for example, how Texas instituted Tort Reform).

Obama railed against "special interests" in his campaign, but has shown he will protect entire special interest classes. Like the UAW and ACORN. In this case, trial lawyers also happen to be among the largest donors to Democrats.