Industry Insider on Obamacare: the Questions We Must Ask! [Mister R.]


On April 2nd of this year, The New York Times published a scathing indictment of Medicare. The article -- "Doctors Are Opting Out of Medicare" -- described some astonishing statistics related to the program, which -- despite its poor reimbursement rate -- is $30 trillion in the red. 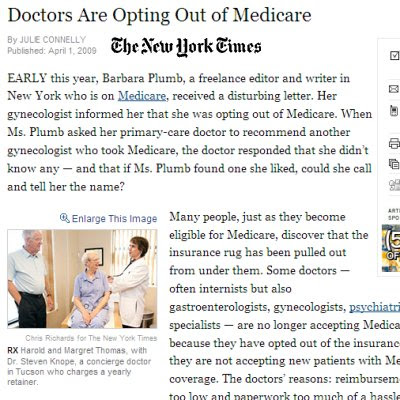 ...Many people, just as they become eligible for Medicare, discover that the insurance rug has been pulled out from under them. Some doctors — often internists but also gastroenterologists, gynecologists, psychiatrists and other specialists — are no longer accepting Medicare, either because they have opted out of the insurance system or they are not accepting new patients with Medicare coverage. The doctors’ reasons: reimbursement rates are too low and paperwork too much of a hassle.

...The solution to this problem is to find doctors who accept Medicare insurance — and to do it well before reaching age 65. But that is not always easy, especially if you are looking for an internist, a primary care doctor who deals with adults. Of the 93 internists affiliated with New York-Presbyterian Hospital, for example, only 37 accept Medicare...

Mister R., a medical industry insider with a background in health insurance programs, offers the following observations and questions.

I believe that Republicans in Congress must ask these questions of the Democrats who would foist a disastrous socialized medical system on an unsuspecting public. Heaven knows, the mainstream media won't do it.

The government runs two programs now: Medicare and Medicaid. As you can see, doctors are opting out of Medicare because the reimbursement is too low and the paperwork tedious.

Reimbursements will be a huge issue under the government program, and this is why insurance companies are complaining about Obama's plan for a government alternative. 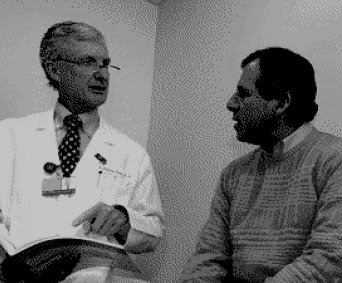 Here is how it works: Insurance companies either have their own network or lease networks of health care providers. Within those networks, reimbursement fees are negotiated. In an HMO, patient discounts are greatest, but the network is limited, so the provider is counting on volume. In a POS, the network is still the gatekeeper, but can refer outside the network and the insurance company will cover the cost. The discounts are not as great as the HMO. In a PPO, the discounts are not great because the patient can choose any doctor, which is why if you opt for a PPO, it costs more.

Let's say a certain doctor performs procedure "A'. Although the Doctor may charge $175 for the procedure, he agrees to accept $100 as payment under the contractual agreement.

In Medicare and Medicaid, there is no negotiated fee. The government determines the rate of reimbursement. In this case, the government gives the Doctor $40 for procedure "A". The Doctor complains that doesn't cover his cost, but not only must the Doctor accept the $40, he must also treat the patient. There is no choice. So the Doctor then opts out instead of losing money treating government patients.

Now, the big question: Under Obama's plan, who determines reimbursement?

If it's the government, then no matter what private insurers to, they will go out of business. They will never be able to compete when they negotiate the reimbursement and pay more than twice the government is paying. Everyone will migrate to the government plan.

Let's take it a step further. Let's say everyone does migrate to the government plan. If Doctors unionize, they can hold the entire health care sector hostage. And the first thing they'll do is complain about the level of reimbursement. Reagan was able to fire the air traffic controllers because there were other air traffic controllers available. I don't think that's the case with Doctors.

• Will reimbursement be negotiated or will the government set a flat rate.

• If it's negotiated, who manages the network?

• Who adjudicates the claims?

• what is the process to determine fraud in the system?

• Does the government exempt itself from HIPAA (Health Insurance Portability and Accountability Act)?

If the government runs the program, then it is self-insured, which means it is a claims adjudicator and not entitled to any medical information. Confused? The government health program would be run from revenue received from the people participating in the program. That is a classic self-funded program. Third party administrators are not entitled to any medical records under a self-insured program.

Please forward these questions to your representatives in Washington.

It's high time we put a stop to the Statist agenda.