Toys From Our Youth That Would Be Illegal Today

A while back I wrote about the Johnny Seven One Man Army rifle (a toy from the sixties that Chuck Schumer would personally ban). What other toys from our youth would the Party of Weakness outlaw in this politically correct day and age? 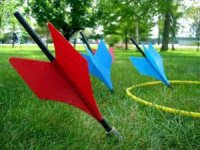 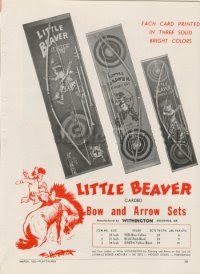 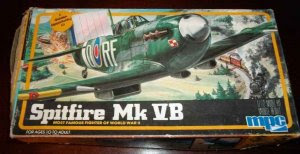 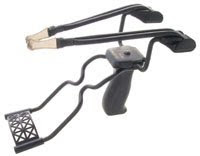 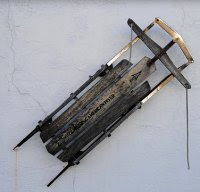 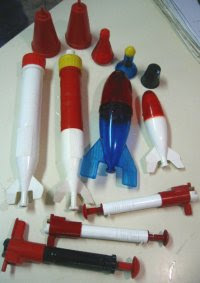 Also: Airedale remembers Crazy Clackers, "...a string with a golf ball sized glass marble. I use to see those things wrapped around telephone pole lines. They were ninja weapons in the wrong hands....which meant every kind of kid had the ability to give themselves permanent brain damage if they got a bit too curious with these miniature bolos." 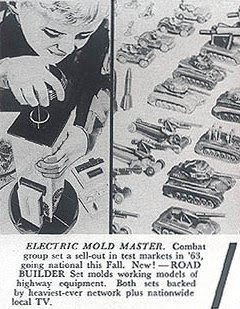 Paul J. recalls the Kenner Mold Master (I had one of those!): "Hot soft plastic you poured into into a mold and made toy guns and vehicles. Rarely came out right but you could reuse the plastic. How many times I burned my fingers I could never say. How I didn't burn the house down who knows." 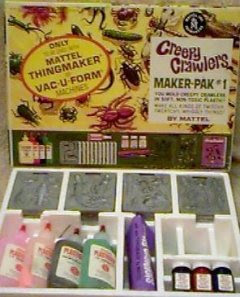 at 8:55 PM
Email ThisBlogThis!Share to TwitterShare to FacebookShare to Pinterest
Labels: Democrats, Water-cooler

How did you miss this one.
http://www.orau.org/ptp/collection/atomictoys/GilbertU238Lab.htm

Seriously, look at some of the stuff Nerf came out with recently. Nerf belt fed machine gun, automatic submachine gun and 50 round mag fed automatic rifle...dude I'm gonna get me all three and go crazy on the neighbors' cats!

And then there were wood burning sets, which consisted of an electric pen-like thing (more like a soldering iron) with a tip that would get hot as hell, and you would burn cool designs on pieces of wood.

It could have caused serious burns to the user and, I suppose, could have triggered the burning down of mom and dad's house.

I don't recall any warnings, and yet, I didn't burn myself, and mom and dad's house was just fine, thank you.

IIRC, the flexy flyer racer did have brakes. You twisted the steering handles up and a small metal arm was applied on top of each of the front wheels.

Didn't work great, put it did slow the damn thing down enough for you to bail out on a steep hill.

A friend ground off a good part of a finger when we were pulling one behind car.

>>You twisted the steering handles up and a small metal arm was applied on top of each of the front wheels.>>

Or you just dragged your toes until it stopped...

Doug, when I was in first grade, I owned the Johnny seven OMA, and I was unstoppable when we played war in the neighborhood. I was a one man army, for crying out loud. And I remember this one kid who was really jealous of me. Was that you by any chance?

My five siblings and I used this toy for years with nary an incident. Could it be that kids are actually smarter and more competent than class action plaintiff's attorneys would have us believe?

Heck, I think you can still buy the wrist-rocket slingshot at Wal-Mart.

I burned myself many times happily making creepy crawlers in my basement rec room with no adult supervision.

If I may, here's a link to a post of mine from a while back.

still have 2 eyeballs and all my fingers

Spend some time at on the boardwalks in South Jersey and you'll discover that clackers are still available.

Guess it's easy to sell those evil plastic balls of doom if you can simply change the name of your little souvenir shop weekly and ignore the lawsuits altogether.

Sigh...nothing like a good game of lawn darts, especially when you convinced your friends to lie on their backs in the target area. Instant tracheostomies!!!

Today we're reduced to using plastic bags weighted with dog shite, collected while walking our Fidosaurus. They arc nicely, but it's just not the same.

Had the water rockets. Can still see the dimples in my parents livingroom ceiling. Can still hear my dads voice cussing us out for launching them in the house.

Now days I have found that the youth of our country is showing more interest in the toys and those are adult toys.

Slightly off topic but I have a full set of Civil War history collector cards issued with chewing gum to commemerate the 100th anniversary of Appomatix Court House. These cards could NEVER be issued today as the scenes depicted were always full on gory with soldiers bayonnetted, "crushed by the wheels" and my fav, "pushed to his doom" with a Union soldier being impaled on a set of stakes.

Each had a period newspaper account of some battle. Good history lessons.

You'd be surprised how few injuries these toys produced. Most are still around. My daughter just got a very nice sling shot at Academy Sports. Wood burning sets are available at any hobby store. One thing - you can't buy a BB-gun at Walmart with your kids. The checker will make you swear you won't let the kids shoot it... And Daisy BB-guns are now made in China.

The water rockets can still be found - I bought some at Target last spring.

Too bad, too, because Jarts were fun; I used to love how they flew.

Couldn't people have just taken some personal responsibility with them?

Oh lord I'm feeling old. My mom, bless her heart, would buy me the fixin's for some nice explosives from the local drug store. Learned the formula from my Sophmore Science teacher in High School. Surprised I didn't lose a limb or two. Use to make 'rockets' out of arrows with CO2 cartridges and match heads and fuses. Made my own hydrogen for some neat exploding ballons. Never ate any of the parts from my erector set either. If you survived, you learned.

That would have resulted in a series whipping from "Barney McFeeley my mom's wooden spoon!

Annnnd nearly anything on earth can ne dangerous if used in the wrong manner! D d d DUH!!!

I have 4 Flexy Racers, I never saw one before instill I bought one at a antique store, now I have 4. 2 from the 1940's and 2 from the 1960's. I'm havering fun restoring them. I'm looking for parts Springs and hand grips and wheel hub caps or the whole Racer.

I had the Creepy Crawlers and the woodburning kit. Had a bb gun also.
As a matter of fact, in sixth grade we were taught gun safety with the bb guns. The problem really isn't the toys. It's a socialogical issue. Critical thinking isn't taught at home along with moral idividual responsibility. Everything is everyone elses fault these days.

The Whamo Air Blaster came with a shredded plastic curtain with a picture of of a gorilla on it to be used as a target. But it was more fun, to put it up next to your little brother's ear, and let it rip!!