Down With Evil Corporations! [Photo]

Via Power Line, this excellent photo is making the rounds on Facebook and other social networks. 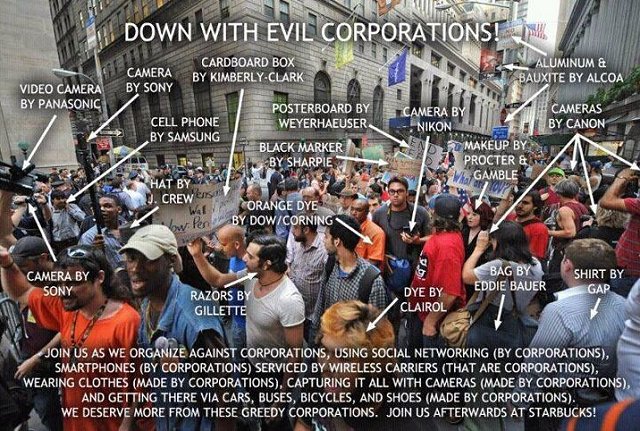 Last night, Mark Levin used a caller as a foil to deconstruct this idiocy.

That would be the federal government, an extra-constitutional monolith that controls every aspect of our lives, from shower-heads, to automobile bumper design, to thermostats, to building codes, to carbon dioxide emissions, to the size of toilet tanks, to health insurance plans, to...

Which is the problem. Remember the old Soviet Union? It tried to control everything. It tried to centrally plan the interactions of millions of individuals with five-year plans. With regulations, bureaucrats, agencies and offices.

And how'd that work out, drones?

What about that Evil corporation that can force you to buy health insurance?

What about that Evil corporation that can tell how you can use your mailbox?

What about that Evil corporation that can tell whether you have the right to speak your mind?

What about that Evil corporation that can tell you whether you have the right defend yourself?

What about that Evil corporation that can tell you how much of your income you can keep?

Hey Doug
You forgot to mention that instead of doing #1 and 2 on the street they use that evil corp. known for the big mac bathroom, otherwise got a good laugh.

So where are all the things in the photo made by banks?

Banks consolidate and then flow (loan) money to people and corporations so they can do business with each other. Banks grease the wheels of commerce. Banks holding on to cash (and NOT lending) is a large contributing factor to unemployment. Money needs to flow in order to work.

Protest in Washington DC, that is the epicenter of the problem. If politicians had any integrity, the corporations would be left to compete on a LEVEL PLAYING FIELD.

Except, you're distorting what the movement is all about. It isn't against corporations in general, it's against corporate rule, greed and influence over the political scheme of things. People want to complain about a "Liberal" media, yet, because the media is a corporation, afraid of having it's image distorted, the media is not publicizing the movement like most other stories, Kim Kardashian's wedding is apparently more important. Stop distorting the facts, do your own research as to what the movement is really about... Stop passing lies and propaganda buzzwords and regurgitating crap with no factual base... Let's start acting like educated Americans.

Since the Supreme Court has upheld that corporations have rights like people why aren't they held accountable like the rest of us citizens?
Where's my huge govt. subsidy like the oil companies get?
Where's my massive offshore tax shelter?
Why can't I pollute the environment and get away with it?
Or drag a corporation through court for 10 years until I get my way?
Don't be so naive as to think that a corporation won't sideline our health as a culture, national security, or basic human rights for an extra 20% profit.