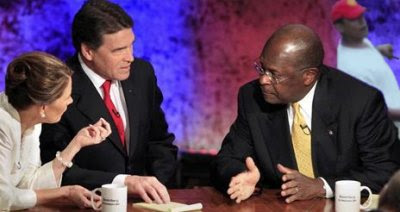 A day after Representative Michele Bachmann, businessman Herman Cain, and Texas Governor Rick Perry debated the economy with the former Massachusetts governor in New Hampshire, the Obama campaign held a conference call with reporters to zoom in on Romney alone.

The call was a sign the Obama campaign is preparing for the man most likely to take on the president in 2012, even if they cannot say that explicitly.

Shhh... no one tell the Axis of Fail that Herman Cain is currently leading Mitt Romney in the polls, having jumped 22 points in the last six weeks.