"Operation Fast and Furious" was a massive firearm smuggling program orchestrated by the Department of Justice. It was ostensibly designed to monitor the flow of weapons to Mexican drug cartels. More than 2000 weapons, including military-style assault- and sniper rifles, were intentionally sold to the cartels over the protests of gun-shop owners and ATF field agents. And virtually none of the weapons were actually tracked by U.S. officials.

The murders of at least two American law enforcement officials and roughly 200 Mexican nationals have since been tied to these weapons.

In sworn testimony, Attorney General Eric Holder denied knowledge of "Fast and Furious" on May 3, 2011.

Asked in May when he learned of Operation “Fast and Furious” and “Project Gunrunner,” Holder claimed he ‘probably’ learned of it ‘over the last few weeks.’ In the testy exchange that followed, Issa pointed out that two Americans were killed by weapons associated with the botched operation, and that in the end, no major criminals were brought to justice. Issa also implies that the Department of Justice was deliberately slow-rolling the request for documentation about the program. You can watch the exchange between Holder and Issa here.

Unfortunately for Holder, CBS News' Sharyl Atkkisson has been doggedly pursuing the case and has unearthed documents that prove Holder lied under oath:

The documents came from the head of the National Drug Intelligence Center and Assistant Attorney General Lanny Breuer... the new documents leave no doubt that high level Justice officials knew guns were being "walked." 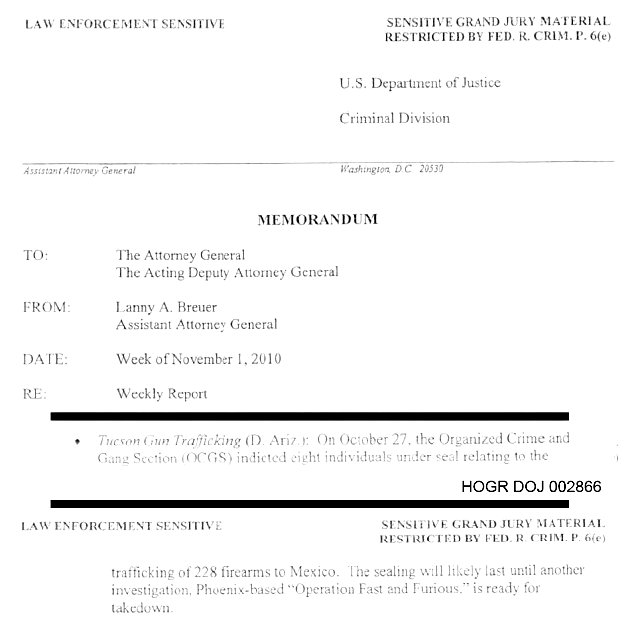 Two Justice Department officials mulled it over in an email exchange Oct. 18, 2010. "It's a tricky case given the number of guns that have walked but is a significant set of prosecutions," says Jason Weinstein, Deputy Assistant Attorney General of the Criminal Division. Deputy Chief of the National Gang Unit James Trusty replies "I'm not sure how much grief we get for 'guns walking.' It may be more like, "Finally they're going after people who sent guns down there."

The Justice Department told CBS News that the officials in those emails were talking about a different case started before Eric Holder became Attorney General. And tonight they tell CBS News, Holder misunderstood that question from the committee - he did know about Fast and Furious - just not the details.

Holder -- during an April 2, 2009 speech in Cuernavaca, Mexico -- also boasted about the overarching operation ("Gunrunner") to Mexican authorities.

Last week, our administration launched a major new effort to break the backs of the cartels.  My department is committing 100 new ATF personnel to the Southwest border in the next 100 days to supplement our ongoing Project Gunrunner, DEA is adding 16 new positions on the border, as well as mobile enforcement teams, and the FBI is creating a new intelligence group focusing on kidnapping and extortion.

In addition, the book Mexico-U.S. Relations: Issues for Congress alludes to Holder's vociferous support of these types of operations.

Holder praised Mexico-U.S. cooperation in the investigations that led to [the] indictments [of 43 Mexican drug dealers]... ...ATF has begun a new intelligence-driven effort known as Gunrunner Impact Teams (GRITs)... and beefed up its Project Gunrunner program as a part of its efforts to stop the flow of guns into Mexico... ...on August 13, 2009, DHS and DOJ, along with Mexico, signed a letter of intent to develop a coordinated, bilateral arms trafficking strategy...

Not only did Holder lie to Congress, but President Obama likewise has feigned ignorance. Yet Gunrunner was part of the "Stimulus package" signed by the President in 2009. 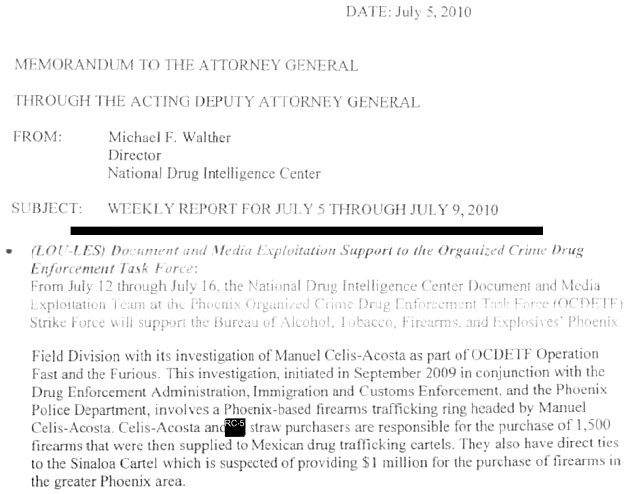 ...Holder is clearly not telling the truth about his role in Gunrunner. He knew about it, boasted of it and took credit for it. Now he's orchestrating a cover-up of it. President Obama needs to man up about Gunrunner and either take responsibility for this tragedy or admit, under oath if need be, that even he didn't know what was in the stimulus bill.

During an interview with a Univision reporter that aired in March, Obama said he was "absolutely not" informed about the ATF program that deliberately funneled guns into Mexico. "I did not authorize it," he said. "Eric Holder, the attorney general, did not authorize it..."

And the American people deserve a a special prosecutor.


Update: The Hill weighs in with "Documents show Holder was informed of Fast and Furious operation in 2010"

Holder is absolutely not qualified to serve as Attorney General. Hell, I wouldn't let him handle a parking ticket.

Oh, and he's a lying piece of shit.

The_Bad has it. Well, quotas aren't held to any standards. That is... sort of what quota means in real terms. Sucks to have a complete quota, top (bottom) to... well, lower, admin.

In a more civil time, traitors would greet the citizens as they entered the cities.

And maybe if Ricky "resigns" the RINOs will be a bit more circumspect with regards to the next attorney general nominee who supports the New Black Panthers philosophy and methods and has defended terrorists in his previous legal beagle days.

I wonder when holder will start squealing like a pig when he learns how his buddy barry tosses him under the bus?

"Operation Fast & Furious" was a new, rogue part of Project Gunrunner that was launched AFTER Barack Obama was inaugurated, AFTER he and Hillary and Mex. Pres. Calderon kept circulating the maliciously concocted lie that 90% of the weapons seized at crime scenes in Mexico were coming from the U.S. When the facts showed that the 90% figure was a LIE, and Obama & Co. got caught with their pants down, they launched Fast and Furious -- an attempt to MAKE the lie into truth, so that they could demonize U.S. gundealers and argue for increased gun control.

"Gunwalker" is a name coined by the great David Codrea (Examiner.com and War on Guns blog), to encompass the whole execrable spectrum of U.S. govt. gun-walking operations: not only Fast and Furious (run out of the ATF's Phoenix office), but also "Operation Wide Receiver" (run out of the Tucson office); "Operation Castaway" (gun-running to Honduras out of the Tampa office); gun-running operations out of Texas and California; and the latest discovery, "Gangwalker," referring to ATF-forced sales of guns by Indiana gundealers to known or suspected crooks who then trafficked them to street gangs in Chicago (Obama's "army"??)

Operation Wide Receiver might be an important side-note in this controversy. See: http://hotair.com/archives/2011/10/05/video-issa-hits-holder-on-ac360/