If you're looking for more evidence that the White House is getting desperate and sloppy, look no further than this tactical error:

“I don’t understand why, you know, one man’s mob is another man’s democracy,” presidential press secretary Jay Carney said Friday.

He added that he sees “a little hypocrisy unbound” in Mr. Cantor’s comments because the GOP leader previously has described tea party activists as democracy in action.

“I think that what we’re seeing on the streets of New York is an expression of democracy,” Mr. Carney said. “I think both are expressions that are totally consistent with the American democratic tradition.”

...Mr. Obama said in a news conference Thursday the protests in New York and other cities express the frustrations many Americans feel about the financial crisis and resistance by the banking industry and Republican lawmakers to greater regulation.

“You’re still seeing some of the same folks who acted irresponsibly trying to fight efforts to crack down on abusive practices that got us into this problem in the first place,” Mr. Obama said. “The protesters are giving voice to a more broad-based frustration about how our financial system works.”

The Obama administration has become a house of mirrors.

Wall Street is the wicked enemy.

Rise up against the evil bankers!

Pay off the evil bankers!

The evil bankers must direct our economy policy or we are doomed!

Exactly. Because when I think about Jay Carney's 'American democratic tradition', what immediately comes to mind are: 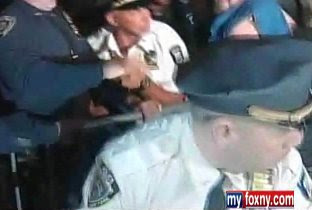 No, Carney: the Tea Party didn't advocate violence, divisiveness, race hatred, class warfare and envy... with ACORN and union hacks bussed in to buttress their ranks.

In fact, the Tea Party represents Americans from all walks of life, from every race, creed, color and socioeconomic class peacefully protesting for individual liberty, respect for private property rights, the Constitution and First Principles.

And how's that class warfare in Obama's "Jobs Bill" going to help address the budget deficit?

Once the Democrats get their hands on that money, guess who they're coming for next?

The problem isn't that millionaires -- America's job creators -- aren't paying enough taxes. It's that the federal government is so bloated, so wasteful, so corpulent and so out-of-control that it threatens to subsume the entire economy.

Believe me when I tell you that 2012 is our last chance to turn this ship around.

at 8:55 AM
Email ThisBlogThis!Share to TwitterShare to FacebookShare to Pinterest
Labels: Crime, Democrats, extremism, Obama

There is no comparison between the Tea Party and this mob...and that is exactly what they are. It reminds me of the 'peaceful' protests in the 60's. Same theme, protest against the establishment, yada, yada. It's sort of interesting that Frances Piven has reared her ugly head as well.
Can't we arrest them for something, like insurrection, maybe?
With the whacky weather, I've joked from time to time that I'm going to run for Mother Nature..Probably good it's a joke, because I'd then be in charge of Thunderbolts, and I'd be hurling them at some people.

A wink and nod from the President to a violent rudderless mob.
I didn't want to believe it before but there is no longer any doubt, Obama hates and wants to destroy America

tea party events, not one arrest

yeah its all the same carney, you fn baghdad bob tool