A bargain at any price: the Obama family retinue only costs the taxpayers a couple of million per week

The man who has borrowed and spent more money than anyone in world history has a well-kept secret. It's called "The SAVE Program" and is President Obama's idea of "budget-cutting". Problem is, it asks federal bureaucracies to "shave 20% from certain categories of spending [so they] will be free to [spend] the savings elsewhere."

Got it? Let's pretend an agency saves a million dollars annually on its travel budget. It's then free to spend that million dollars on, I don't know, hiring six more bureaucrats. Brilliant, eh?

The fact is, most of these "savings" will total up to a million bucks or so.

And that million dollars is what Obama and his family cost the American taxpayer... per week: 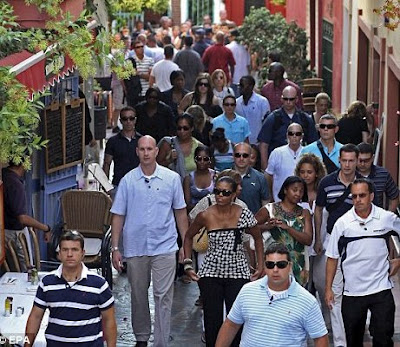 Discretionary Use Of Private Aircraft:

So the President touts a program that he says is going to save billions over "the next several years" when a realistic estimate is more like a couple of million and he spends that in a week?

And that doesn't even count all of the wasteful spending on the First Lady's 22-person staff (the largest ever) and a coterie of personal attendants to the President (beyond the Secret Service). Nor does that count their numerous vacations to all parts of the world on the taxpayer's dime.

Let's be kind and say it only adds up to two million a week.

I call this a "Cloward-Piven savings program".

Right out of the middle ages. King and queen and all the other royals living in the castle while sending their soldiers to tax the surfs into starvation.