Mexican drug cartels now operating freely in the U.S., thanks to the staunch border security efforts of the Obama administration

Courtesy of the peerless Borderland Beat, may I present more evidence that our beloved baritone DHS chief -- Janet Napolitano -- was correct when she asserted that the border was "as secure as it's ever been"?

Which is to say, it's as insecure as ever, thanks to a very public campaign to promote illegal immigration by the Holder Justice Department and the Obama administration. 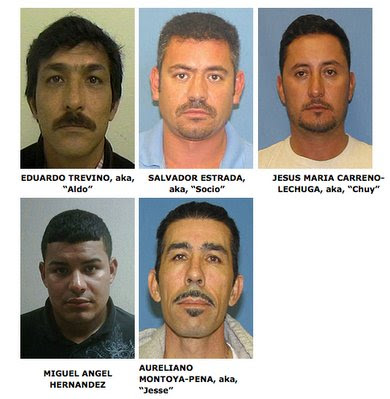 ...A joint investigation led by the Drug Enforcement Administration and the Federal Bureau of Investigation resulted in the charges, as well as accumulated seizures during 2010 of more than $12.4 million cash and approximately 250 kilograms of cocaine in the Chicago area...

• Drug Cartels Operating out of Dallas:

Capra says the Gulf Cartel, La Familia, and the Sinaloa Cartel all have a presence in Dallas... The drug mules who carried loads in for the cartels are living in Dallas as well. Moises Albino Castillo was one of those mules... "I traveled as a drug mule three times. I brought in 15 kilos of marijuana on my back two times," he says.

...Capra tells us drug dealers are willing to establish themselves through violence in Dallas... "We do know that in the past two years, there's been 12 different homicides that we've actually tracked back to drug trafficking groups," he says... It's all part of the cartels' plans to move their drugs through the Valley to Dallas and then to the rest of America.

Now I'd like you to consider these stories with the following context, as reported little more than a week ago:

• Immigration agents ordered not to arrest illegal aliens, even those caught committing felonies: 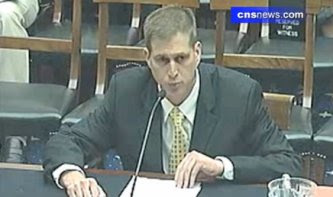 Chris Crane, president of the union that represents the nation’s Immigration and Customs Enforcement (ICE) officers, has provided the House Judiciary Committee [with] internal ICE emails [that] verbally ordered officers in the field not to arrest illegal aliens who did not have prior criminal convictions--even if they were fugitives evading deportation orders or were individuals who had illegally re-entered the United States after being deported and were thus committing a felony.

“Increasingly, ICE headquarters leadership refuses to put directives to supervisors, agents and officers in the field regarding law enforcement operations in writing... Orders and directives are given orally to prevent the activities of ICE's leadership from becoming public,” Crane, president of the National Immigration and Customs Enforcement Council 118, testified. “Agents and officers in the field are frequently under orders not to arrest persons suspected of being in the United States illegally.

There's something very sickening about this perversion of the American legal system. And someday, hopefully very soon, Eric Holder will be facing the criminal charges he so richly deserves.

Quoted from and Linked to at:
Obama Heads 'Presidents Without Borders'