Summing up the #OWS Movement in a Single Photo 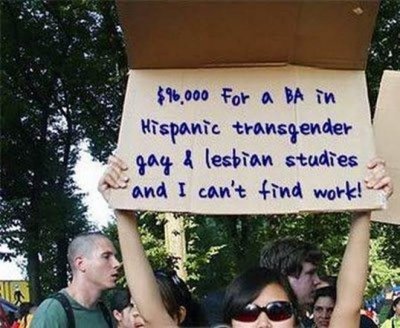 I wonder why? Maybe she should have picked a broader and practical major, and not spent $96,000 on an interest.
I'm guessing even if the economy were booming, she'd be hard put to find a job in that specific field.

She should plead insanity to have her debt forgiven.

Surely you all are not so stupid as to think this is anything other than someone's photoshop gag.

That is a font on cardboard?

If you don't like this message makeup your own!

Anonymous:
That sign is every bit as real as the OWS is "Grass Roots" and "Spontaneous".

Of course it is a fake, only a fool would think otherwise. However, it does sum up the movement quite nicely. OWS is the end result of the 'Me' generation where every child is special and gets a prize.

Data from the Commerce Department shows employee pay is now down to the smallest share of the economy since the government began collecting wage and salary data in 1929.

Meanwhile, corporate profits now constitute the largest share of the economy since 1929.