According to The New York Daily News, Nancy Pelosi's net worth skyrocketed by a jaw-dropping 62% over the last year of her tenure as Speaker of the House. Her net worth was $22 million in 2009 and is currently reported at $35.2 million.

Which makes her failure to pay her bills all the more outrageous. A caller to the Mark Levin Show (11/9/2011 about 1:32) named "Sharon" (a cover name) described tactics that are probably all too common among the Democrat elite who claim to be for the "little people". 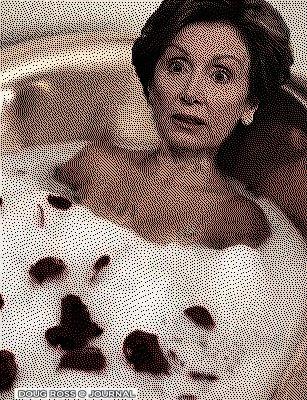 Hi, Mark, I just wanted to call in and let you know a year ago, October 2010, my plumbing company did some work for Ms. Pelosi and her husband in D.C., took care of her problem and billed her accordingly... She chose to ignore payment of that bill and we kept sending her an invoice, pretty much on a routine basis and never heard back from her.

We sent her a nice letter saying, 'Please, this invoice is past due', and she chose not to pay it. She says she's for the common person, but it's ironic.

...I work for the plumbing business... this has been over a year now... [There's no dispute] ...the problem was solved and the thing that bothers me is that we provided materials for the job, the labor was performed, my employer paid the plumber and had to buy the materials, and it just seems very unfair that everything was done in good faith... and nothing reimbursed... [The owner] is a small-business owner and he knows this is going to be the case on an occasional basis, but it seems so unbelievable that somebody in that position -- who can afford to pay her bill for a service that was rendered -- chose not to.

...It was October of 2010 and Mr. Pelosi called the office and I happened to be the one who answered the call. He, it was interesting, we chuckled after we hung up, because he was dropping his name, his wife's name, interjecting it into the conversation... to make clear that I understood who this was...

We showed up, took care of the problem, everything was solved. Just a routine service call... it wasn't a major thing, it had to do with the bathtub in the bathroom, it wasn't draining properly. And she want to be able to use that as a form of relaxation at night; he informed me of that in the call. So we took care of that for her. It was nothing serious or overly complicated.

[The bill wasn't a large amount] ...not at all, absolutely blowing us off.

Levin observes that "this is the sort of thing that happens all the time. The little people are kicked around by the big people who claim to love them. All the time. I've heard stories -- the Kennedy family, other families -- you'd be amazed."

Folks, this is what an oligarchy looks like. And this is why we must flush all Democrats and RINO pretenders from office in 2012. Business as usual needs to come to an end in Washington, and we need to send a message. Let's call it "flush twice to remove the clingers". It's time to re-establish Constitutional government in Washington.

So, on top of everything else, she's a deadbeat. I'm shocked ... shocked!