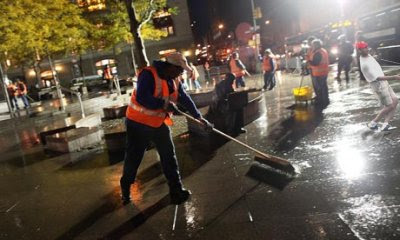 Protestors will not be allowed to bring tents and overnight gear to Zuccotti Park, a Manhattan judge ruled today, dealing a huge blow to the Occupy Wall Street movement.

"The [protestors] have not demonstrated that they have a First Amendment right to remain in Zuccotti Park, along with their tents, structures, generators and other installations to the exclusion of the owner's reasonable rights and duties to maintain Zuccotti Park, or to the rights to public access of others who might wish to use the space safely," Manhattan Supreme Court Judge Michael Stallman wrote in a four-page decision.

"Neither have the applicants shown a right to a temporary restraining order that would restrict the city's enforcement of law so as to promote public health and safety."

DNC headquarters will reportedly fly its official flag -- which depicts a donkey taking a dump on a police car -- at half-staff tomorrow, after employees have been de-loused.