Today's 10-year yields for the sovereign debt of the PIIGS (Portugal, Ireland, Italy, Greece and Spain) confirm that Europe's debt crisis has spiraled out of control. 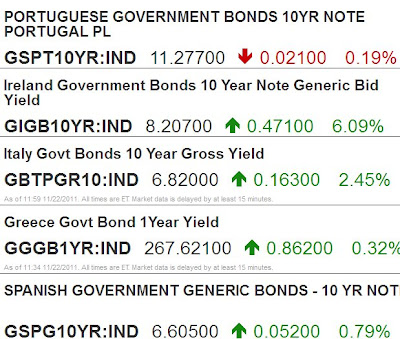 The can-kicking appears to have come to an end:

The time has come to confront an ugly truth: The possibility that the Eurozone will break up, or rather fall apart, is growing increasingly likely.

In fact, I'd say given recent developments in Italy the probability of a breakup is as high as 40%... [and] a Eurozone split would be bad news - no matter which way it happened.

At the end of the day there are no easy answers on this one. The best you can do is to find markets with little economic connection to Europe - and even that's not easy.

The Eurozone is dead, whether or not the coroner has been called.

at 6:42 PM
Email ThisBlogThis!Share to TwitterShare to FacebookShare to Pinterest
Labels: Economy, World