On the First Tuesday in November, the Dead will walk the Earth and... Vote Democrat

Not content with its constituencies of felons, illegal aliens, voters from other states, and clueless drones, Wisconsin's Democrat Party appears ready to borrow a page from the Chicago machine:

You know what they say: 9 out of 10 Dead Voters vote Democrat. [Ed: Must be a typo on Jim's part: it's usually ten of ten]. Democrats are heading out to the cemeteries to collect names for their petition drive to oust Governor Scott Walker... 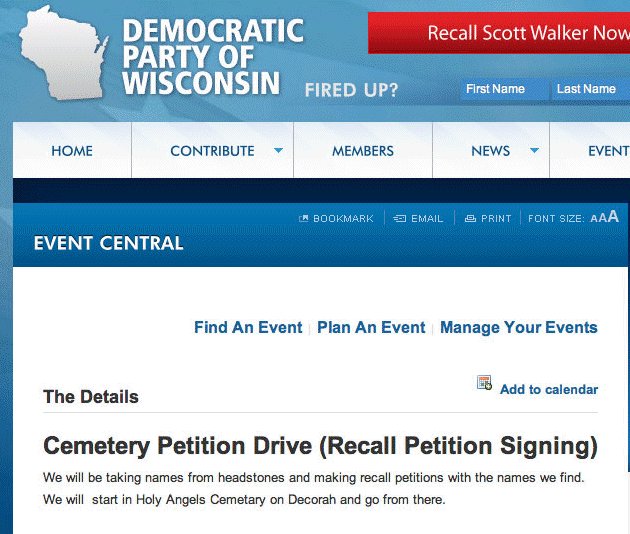 Having realized that the site was inadvertently made public, Wisconsin Democrats appear to have taken it offline where they will presumably spread the word via Journolist.

Who knew the 'chicago way' was an entire geographic region?

Any chance that the Republicans will have the balls to challenge this???

You don't get it, do you? Dem's won't need the dead on the first Tuesday in November. By that time the election will already have been decided. Relieved of the necessity to participate in their own primaries, Democrats will cross over in droves to vote in and skew the Republican primaries and caucuses. The Republican candidate who is most easily defeated will have been selected by Democrats. From there, it will be a cakewalk. It isn't the general election you have to worry about. It's the primaries. See: Obama 2008

The host of this particular event is "William Toirtap" “Toirtap” is “Patriot” spelled backwards. Either someone is pranking the Dems or some Dem is pranking patriots. (You know, like us)
It sure smells like something the Democrats would do...

I used to live in Chicago. I can tell you that the "Chicago way" is presently governing the entire US. Case in point:

How David Axelrod and the Chicago Machine Smeared Herman Cain