Behold the sublime genius that is Mediaite's Tommy Christopher: 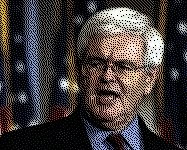 Current GOP frontrunner Newt Gingrich referenced a popular (among right-wingers) but baseless attack against President Obama this weekend during a speech in Naples, Florida. Challenging the President to a series of Lincoln-Douglas style debates, Gingrich told the crowd “If he (President Obama) wants to use a teleprompter, that would be fine with me.”

Gee, Tommy, I'm sure Newt's trembling at the prospect. 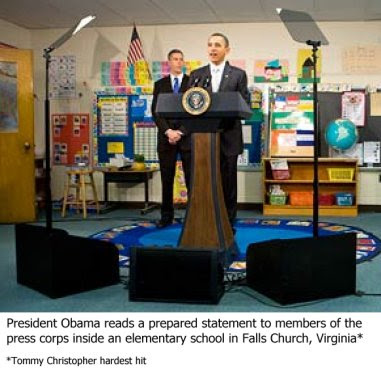 That is, as long as the President isn't asked to count the number of states, pronounce the word corpsman, discuss the Intercontinental Railroad, translate sentences into Austrian, or give a eulogy for the 10,000 killed by a tornado in Kansas.

I'm actually a little miffed because now we'll have to update President Obama's Complete List of Historic Firsts to include Tommy Christopher's noteworthy accomplishment; he's the first reporter ever to have his lips surgically attached to a president's keister.

LOL - LOVE the teleprompters to speak to elementary school kids. I'd forgotten how silly it looked. Must - stop - laughing.

I've read that he uses teleprompters in White House meetings too.

I dispute your contention - Tommy may be the deepest, but David "Crease in his pants" Brooks was the first.

@Anonymous (if that's your real name): Either David Brooks or Chrissy Matthews.

And let's not forget Obama's recent proclamation that Hawaii (his own alleged birthplace) is in ASIA!

This all reminds me of when Hirohito came down and signed that surrender to MacArthur...