The head of the Carlyle Group, Oliver Sarkozy, just left CNBC's cheerleaders aghast as he described the scale of the Eurozone crisis. 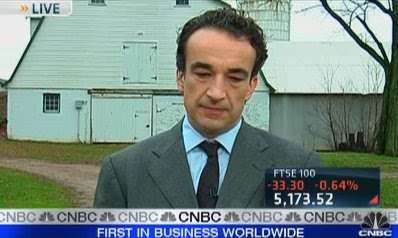 The math I'm working with is very simple.

In Europe, that $3 trillion is $30 trillion. So if you multiply the $212 by ten, you get the $2.12 trillion. In my view, the issues on the European banks are bigger than the issues on the books of the US banks. So if you want to stabilize that $30 trillion and in my view it's not that you want to, it's that you have to, you do not have a choice, you're going to have to be at least at $2.1 trillion and I suspect it may need to be more.

In other words, the Eurozone needs a cash infusion that is ten times the size of TARP*.

I'll check the couch to see if there's a spare $2.1 trillion that fell under the cushions.

You: stupidest person on the internet?

Why do you hate Oliver Sarkozy?