With a Jennifer Lopez lookalike seated behind the wheel, a Fiat 500 actually broke down on a Bronx street during the recent filming of a TV commercial purportedly showing the actress driving around the borough in which she grew up. 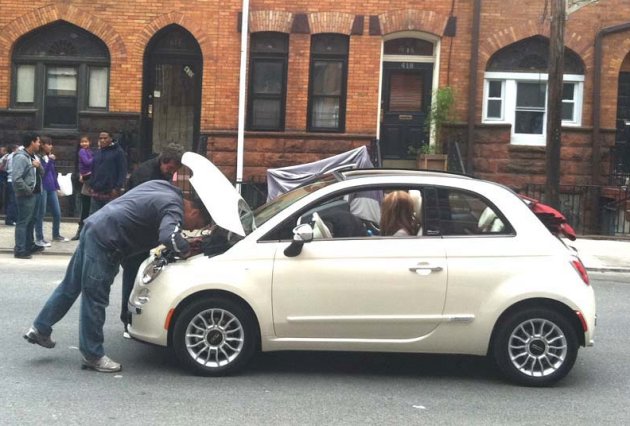 As seen above, the Fiat came to a halt during filming in September on East 136th Street in Mott Haven. While two men tinkered with the engine, the J. Lo stand-in sat patiently at the wheel, her face obscured by honey-colored hair styled just like Lopez’s.

I happened to be given a rental Fiat 500 Sport accidentally a couple of weeks ago and got to drive it in a variety of urban and rural settings for a few days: 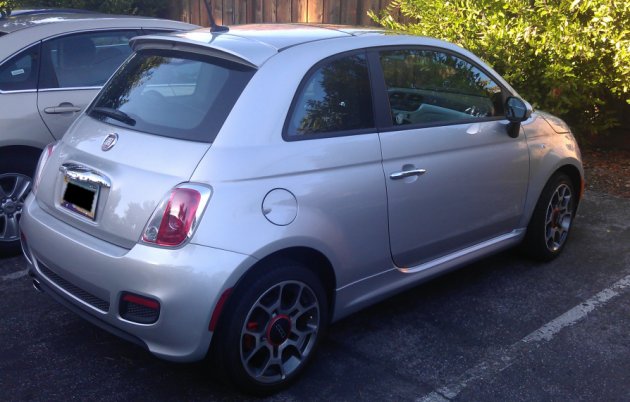 It was so small, it literally occupied only half of a normal parking spot. Slightly smaller than a Mini Cooper and slightly bigger than a Smart ForTwo, the car has a number of disappointing qualities:

• The Sport starts at $17,500
• The car is woefully underpowered, pumping out 101 horses while weighing a relatively staunch 2,400 pounds (for comparison purposes, the 2012 Mazda Miata generates 167 HP and weighs only 100 pounds more). The answer to the 0 to 60 question is... uhm, yes, it can go 0 to 60. I think.
• The build quality is spotty; the sunroof liner was falling apart in the unit I rented (with only 3,000 miles on it)
• The backseat is so small it's just a rumor; the front is plenty cramped for anyone over 6-feet tall

Both the Sentra and Altima are infinitely larger, more comfortable, and drivable than the Fiat 500. And you would certainly feel safer in either Nissan.

The Fiat may be fine if you live in inner-city Rome, where the streets were designed for horse-drawn carts. But in this country, it feels like you're driving a scale-model of a real car.

at 10:56 PM
Email ThisBlogThis!Share to TwitterShare to FacebookShare to Pinterest
Labels: Autos

The Fiat will be this years Yugo.

Ah! A Fake car driven by a fake celebrity.

If i knew nothing of this product but that J-Lo endorsed it, i would shop elsewhere.

See what it gets to be by going Euro?
Redistributing the wealth and downsizing quality and comfort.

That's the starting price for a new Hyundai Elantra...which has similar gas mileage, a usuable trunk and the cabin space of a midsize. (I recently bought an Elantra; it's almost as spacious inside as my old Dodge Intrepid was.) And the Elantra is more than quick enough. Cruises nicely at 70 mph, too.

Based on my limited experience with the 500, I'm not sure it could even make it to 70 unless you dropped it off a cliff.

Ford's new Focus is in the same ballpark, at least in starting price, with probably a better array of standard equipment and certainly more horsepower.

If the Cinquecento is the car that's going to save Chrysler...sigh. The 500 actually makes me miss the K-car...

FIAT will always be an acronym for Fix It Again Tony.

They're about to introduce a high horsepower version (160 hp), the Abarth. I'm sure it will scoot, but the last I heard it is supposed to cost as much as a GTI, which has twice the room, can come with 4 doors, a choice of manual or a brilliant automatic, and drives like a real German car.

Try this site for an insiders look at the auto biz.
http://www.autoextremist.com/current/2011/11/22/the-autoextremist.html