Before you click to enbiggen the chart (below), please consider this Los Angeles Times article by Ronald Brownstein, which appeared in print on page A-5 of the May 31st, 1999 morning edition.

These numbers are dramatic enough to deserve more detail. When President Clinton took office in 1993, 42% of African Americans and 39% of Latinos owned their own home. By this spring, those figures had jumped to 46.9% of blacks and 46.2% of Latinos. 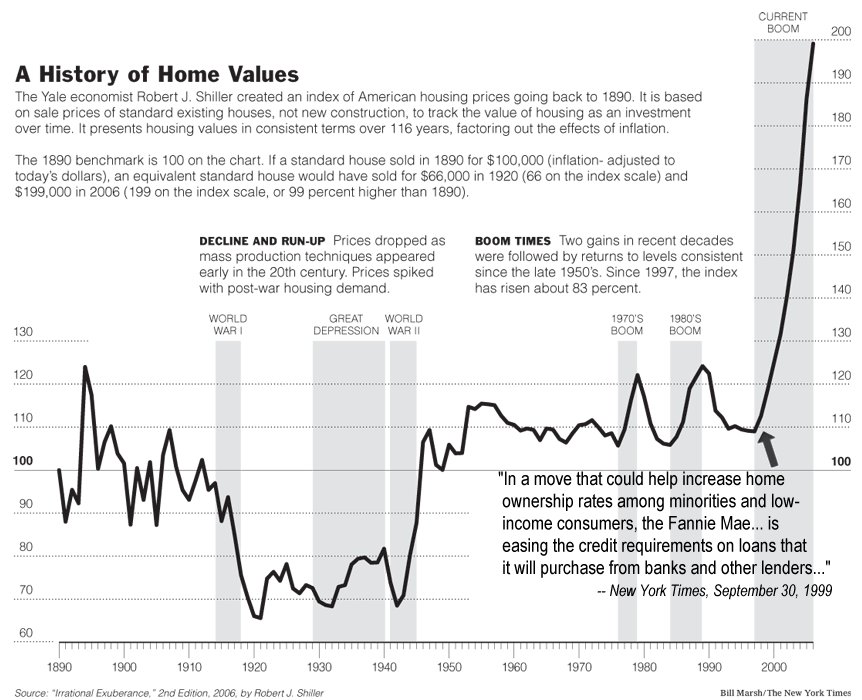 That’s a lot of new picket fences. Since 1994, when the numbers really took off, the number of black and Latino homeowners has increased by 2 million. In all, the minority homeownership rate is on track to increase more in the 1990s than in any decade this century except the 1940s, when minorities joined in the wartime surge out of the Depression.

This trend is good news on many fronts. Homeownership stabilizes neighborhoods and even families. Housing scholar William C. Apgar, now an assistant secretary of Housing and Urban Development, says that research shows homeowners are more likely than renters to participate in their community. The children of homeowners even tend to perform better in school. Most significantly, increased homeownership allows minority families, who have accumulated far less wealth than whites, to amass assets and transmit them to future generations.

What explains the surge? The answer starts with the economy. Historically low rates of minority unemployment have created a larger pool of qualified buyers. And the lowest interest rates in years have made homes more affordable for white and minority buyers alike.

But the economy isn’t the whole story. As HUD Secretary Andrew Cuomo says: “There have been points in the past when the economy has done well but minority homeownership has not increased proportionally.” Case in point: Despite generally good times in the 1980s, homeownership among blacks and Latinos actually declined slightly, while rising slightly among whites. 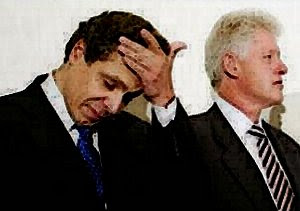 All of this suggests that Clinton’s efforts to increase minority access to loans and capital also have spurred this decade’s gains. Under Clinton, bank regulators have breathed the first real life into enforcement of the Community Reinvestment Act, a 20-year-old statute meant to combat “redlining” by requiring banks to serve their low-income communities. The administration also has sent a clear message by stiffening enforcement of the fair housing and fair lending laws. The bottom line: Between 1993 and 1997, home loans grew by 72% to blacks and by 45% to Latinos, far faster than the total growth rate.

In 1992, Congress mandated that Fannie and Freddie increase their purchases of mortgages for low-income and medium-income borrowers. Operating under that requirement, Fannie Mae, in particular, has been aggressive and creative in stimulating minority gains. It has aimed extensive advertising campaigns at minorities that explain how to buy a home and opened three dozen local offices to encourage lenders to serve these markets. Most importantly, Fannie Mae has agreed to buy more loans with very low down payments–or with mortgage payments that represent an unusually high percentage of a buyer’s income. That’s made banks willing to lend to lower-income families they once might have rejected.

But for all that progress, the black and Latino homeownership rates, at about 46%, still significantly trail the white rate, which is nearing 73%. Much of that difference represents structural social disparities–in education levels, wealth and the percentage of single-parent families–that will only change slowly. Still, Apgar says, HUD’s analysis suggests there are enough qualified buyers to move the minority homeownership rate into the mid-50% range. [Ed: brilliant.]

...But with discrimination in the banking system not yet eradicated, maintaining the momentum of the 1990s will also require a continuing nudge from Washington. One key is to defend the Community Reinvestment Act, which the Senate shortsightedly voted to retrench recently. Clinton has threatened a veto if the House concurs.

The top priority may be to ask more of Fannie Mae and Freddie Mac. The two companies are now required to devote 42% of their portfolios to loans for low- and moderate-income borrowers; HUD, which has the authority to set the targets, is poised to propose an increase this summer... Barry Zigas, who heads Fannie Mae’s low-income efforts, is undoubtedly correct when he argues, “There is obviously a limit beyond which [we] can’t push [the banks] to produce.” But with the housing market still sizzling, minority unemployment down and Fannie Mae enjoying record profits (over $3.4 billion last year), it doesn’t appear that the limit has been reached.

The breathless mainstream media and the race-obsessed Democrat Party hyped the kind of no-documentation, loosely underwritten loan that formed the core of the housing crisis.

In July of 2009, according to The New York Times, Andrew Cuomo's Department of Housing and Urban Development mandated that half of all loans purchased by Fannie Mae and Freddie Mac were to have originated with low- and moderate-income borrowers. In 1998, 44% of all Fannie loans had already met those criteria.

Consider the chart in that context.

On the way: more central planning, more social engineering, more Democrat-inspired disasters, but this time with your health care, not just your home.

It's been my understanding all along (and I remember all this "redlining" crap because I was in law school when it was evolving - same time as Barack - at a top school also) the CRA was being used not so much as a redistributive tool but a reparations tool. At least that's what I recall the ideological justification as being.

Yes, and the "study" that was used for the evidence of redlining was proven to be a complete fraud.

Redlining was largely a myth. Certainly in this era of payday loans and rent-to-own stores that cater to a minority clientele, the idea of redlining mortgage districts is ridiculous. Will there be a higher cost (i.e. interest rate) for areas with dubious economic prospects and uncertain housing values? Absolutely. But the market could set that cost quite easily and still provide access to low-income borrowers.

Every single time the markets are distorted by government intervention, we get adverse consequences. Fannie, Freddie and CRA begat the housing crisis. Subsidized ethanol causes higher grain prices. Subsidized solar plants lead to bankruptcies. Tariffs erode entire industries that grow soft and fat under the protection of the U.S. Customs Service. Giveaways to large corporations to move their headquarters take monies away from the small businesses who actually create jobs.

Etc., etc., etc. The Democrats will never, ever learn. But the Republicans can and should.

Either housing went through one helluva bubble or money became almost worthless. I vote for both. It's kind of funny. In 1890 a feller could walk into a store with a $20.00 gold piece and buy a Colt Single Action Army revolver, holster and box of ammo and walk out with some change. A guy with that same gold piece still can. A guy with a $20.00 bill?

"The breathless mainstream media and the race-obsessed Democrat Party hyped the kind of no-documentation, loosely underwritten loan that formed the core of the housing crisis."

In other words, the gub'mint picked winners and losers via 'liars' loans' - and the tax payers paid for it through their nose.

I'm currently reading and "Reckless Endangerment" which names names on how the government started the housing book, and how Wall Street joined in. If you want to know why your mortgage is underwater, your 401K has collapsed, or you've lost your house or job, this chart ,and that book will tell you. And I fear that worse is coming. I will link to this from my Old Jarhead blog

Robert A. Hall
Author: The Coming Collapse of the American Republic
(All royalties go to a charity to help wounded veterans)
For a free PDF of the book, write tartanmarine(at)gmail.com