The Sipsey Street Irregulars point us to a powerful missive by retired Congressman James Lightfoot. 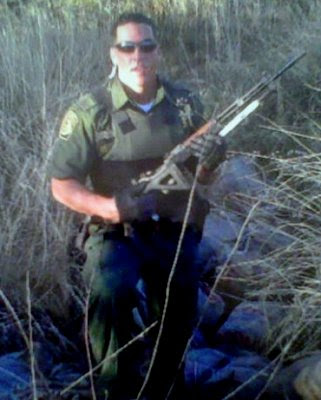 Northwest of Nogales, Arizona, Peck Canyon is a hotbed for illegal drugs and a battleground between illegals coming from Mexico, fighting amongst themselves and the US Border Patrol. At 11:15 PM the night of December 14, 2010 the Border Patrol is watching a “rip crew” (illegals that prey on other illegals moving drugs into the US). The illegal rip crew was in a position to ambush anyone coming up the canyon.

Border Patrol agents commanded the illegals to drop their weapons. When they did not, the Patrol fired at them with beanbags as required by engagement protocol. The illegals fired back with AK-47s and real bullets.

Two agents then responded with one long gun and one pistol.

When the firefight was over, Border Patrol Agent Brian Terry was dead. An AK-47 bullet had entered his back some 29 inches below the shoulder.

One of the rip crew was wounded. There were no other injuries.

Today, one of those rifles is missing; picked up by the Federal Bureau of Investigation (FBI) to protect a “CI” (confidential informant) the agency is working.
A bright, respected, dedicated, well-trained young man, a United States Federal Law Enforcement Agent, is dead at the hands of illegal aliens using rifles supplied by our own DOJ through ATF.

Do you see anything wrong with this picture?

So much is wrong that it almost defies speech. Everything about this situation rubs against every principle, tenet, belief, ideology or standard that this country stands for.

And, much of what the DOJ and ATF has done and continues to do is in defiance of the law.

Operation Fast and Furious put those weapons in the hands of the Mexican Drug Cartels, deliberately. It was no accident. It was by design.

William Newell, special agent in charge of the Phoenix field office of ATF, and William McMahon, the head of western field operations for ATF, are the architects of Fast and Furious. They both gave misleading and incomplete information to a Congressional Oversight Committee.

Attorney General Eric Holder has stonewalled the committee to the point he could probably get a job as a stone mason when he finally leaves government.

As a reward for their misleading testimony Newell and McMahon were whisked into ATF headquarters fortress on New York Avenue in Washington, DC to protect them and their pensions.

The number of members of Congress calling for Holder to resign grows each day. However, this is the wrong direction for this investigation to go. Once Holder resigns with all his government pensions and benefits, he is off the hook.

Holder is one fish where the hook needs to be set, he must be indicted; and Newell, McMahon and several others should join him in a courtroom defending his use of a Federal Agency to promote this Administration’s anti-gun agenda while breaking US law in the process.

Foolishness that has gotten two US Federal Agents killed and countless hundreds of innocent Mexican citizens killed and wounded.

Congress, show us you really mean to uphold the Constitution you swore to protect.
Indict these people now.

Yesterday Rep. Steve Pearce (R-NM) stated that there are 1,600 weapons from Fast and Furious still unaccounted for. It's time to end this charade. Eric Holder must resign or face indictment.

Holder must resign AND be indicted. Leaving the position of authority does NOT relieve a person from the responsibility of facing the consequences of their crime. There are way too many cases where government officials commit crimes (from Rangel to Pelosi), and yet they walk away, whistling a merry tune all the way to the bank.

If we want to avoid a Henry Bowman type of scenario developing, this blatant criminality must be addressed. And soon.