The author of the infamous -- and now debunked -- "hockey stick" graph that purported to prove global warming is a climate "scientist" by the name of Michael Mann.

Mann's work depended in great part upon tree ring data. The relative width of tree rings, in Mann's estimation, could be used as proxy data for reconstructing past temperatures.

Newly revealed by the Climategate 2.0 email drop: the late John L. Daly eviscerated Mann's use of tree rings, in language as terse and powerful as one could imagine (emphases mine).

The width and density of tree rings is dependent upon the following variables which cannot be reliably separated from each other. sunlight – if the sun varies, the ring will vary. But not at night of course. 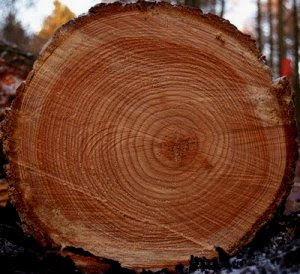 • pests/disease – a caterpillar or locust plague will reduce photosynthesis

• access to sunlight – competition within a forest can disadvantage or advantage some trees.

• moisture/rainfall – a key variable. Trees do not prosper in a droughteven if there’s a heat wave.

• snow packing in spring around the base of the trees retards growth temperature – finally!

The tree ring is a composite of all these variables, not merely of temperature. Therefore on the 15% of the planet covered by trees, their rings do not and cannot accurately record temperature in isolation from the other environmental variables.

...Mann’s theory simply does not stack up. But that was not the key issue. Anyone can put up a dud theory from time to time. What is at issue is the uncritical zeal with which the industry siezed on the theory before its scientific value had been properly tested. In one go, they tossed aside dozens of studies which confirmed the existence of the MWE and LIA as global events, and all on the basis of tree rings – a proxy which has all the deficiencies I have stated above.

The worst thing I can say about any paper such as his is that it is `bad science’. Legal restraint prevents me going further. But in his case, only those restraints prevent me going *much* further.

The entire global warming movement was the product of an utterly corrupt United Nations; it can be considered a follow-on project to "Oil-for-Food" and other ripoffs designed to redirect billions of dollars into the pockets of global bureaucrats.

And some "scientists" -- eager to cash in on immense grants offered by governments to strengthen their case for more regulations and more control -- were happy to oblige. The fact is, man-made global warming is the new alchemy -- and the Climategate emails reinforce the raw greed and criminality behind this pseudo-scientific religion.

at 11:55 AM
Email ThisBlogThis!Share to TwitterShare to FacebookShare to Pinterest
Labels: Climate, Crime, Democrats, Energy, MSM