But I thought it was a "Climate Emergency"!?! 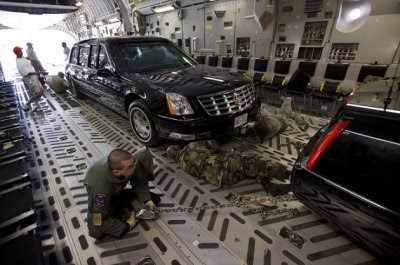 The five medium-capacity C-130s and four heavyweight C-17s will be used to ferry security vehicles, armored limousines and communications gear into cities ahead of Obama’s campaign appearances.

In the months before November, the president is expected to fly into multiple cities per week, and speak at multiple sites per day. On Mar. 8, for example, the president will fly to Richmond, and then drive over to a Rolls-Royce aircraft-parts factory. That evening, he’ll fly down to Houston, Texas.

His wife, Vice President Joe Biden and many of his cabinet secretaries are using the Air Force’s fleet of VIP aircraft to visit more states as the election season speeds up.

Of course they will.

Does any liberal out there want to venture a guess how many years I'd have to drive my sports car to equal the carbon footprint of a single Obama campaign trip?

I've got $15 burning a hole in my PayPal account, just waiting to be awarded to the first drone fine progressive to get within an order of magnitude.

I'm so sick and tired of this African dictator and his wife (surprised he doesn't have four, but then considering stories I've read...well, I won't go there). Forget the hypocracy of the carbon footprint; what about the money, the fact that the military doesn't have its equipment, the illegality and the OUTRAGE? This is against the law, dammit, and the congress lets him get away with everything. He's not even supposed to use gov. cash, let alone military fleets, for campaigning. He's in contempt of court in LA, responsible for gun-running and discrimination against whites, he's getting our military killed, nobody knows who he is...well, you know -- Why won't somebody act?

And then Jesus came upon his disciples and said, "What's this shit I've been hearing about a human sacrifice for your sins!!!?? Who in the goddamned hell came up with that Neanderthal bullshit!!!!?? What are we, living in the fucking Stone Age!!!!? Blood sacrifice!!!!!!!!!!?? Listen, you can take that sickening, disgusting, vile, evil, sadistic, asinine pile of Stone Age donkey shit and shove it straight up your Cro-Magnon asses!!!"--Jesus Christ, the Lost Gospel

But of course his CAMPAIGN is paying for all this, RIGHT?

I would love to have civil discussion, but your obvious anger and lack of communication skills prevent it.