Barack Obama will pay Iran $1.7 billion in a "settlement" that frees several of the many American hostages Iran is illegally holding.

Obama's statement suggests that the settlement, most of which is interest, is tied to the latest hostage release... "With the nuclear deal done, prisoners released, the time was right to resolve this dispute as well." It sounds a lot like the hostage releases were linked to the amount of money Obama is giving Iran. Which wouldn't be surprising.

This is on top of all the other sanctions relief Iran will be getting.

Iran is a terror state. The IRGC, its terrorist arm is the Shiite equivalent of Al Qaeda and ISIS except it's based out of an entire country. This is straightforward funding of terrorism. So why are we still prosecuting people for penny ante levels of providing material support to terrorists. When the Obama regime has just kicked over $1.7 billion to terrorists. And no one is putting it on trial.

Which makes the latest news all the more predictable: 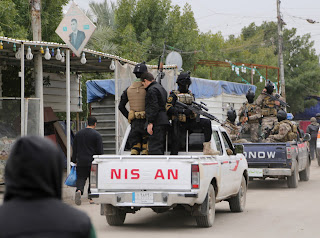 Al-Aribiya is reporting that three Americans have been kidnapped by militia in Baghdad...

...It seems that Iran has revalidated a long-standing business model used in that part of the world for a few thousand years: kidnap for ransom.

It seems much more than a coincidence that after the United States gave up seven prisoners doing time for supplying Iran with prohibited items, along with foregoing prosecution on fourteen additional criminals in exchange for four Americans (leaving two still in Iranian custody) and agreeing to pay Iran $1.7 billion...

Well done, Obama. Who could have predicted that a Shiite militia in the Iranian puppet state of Iraq would kidnap three Americans after you provided material support to the Iranian terror state?

I really wonder if America can survive what that S.O.B has done over the last seven years. The MO-FO is in the home stretch now. I pray we make it.