Flint, Michigan is one of many blue hell-holes infamous for forced unionism, easy access to welfare, and outrageously expensive benefits for public sector workers. Its economy imploded decades ago and the pain still continues for the dazed retinue unable to move away.

The latest debacle? To save money, the bankrupt city government switched its water supply from Detroit's system to one sourced by the Flint River.

The Flint River water was found to contain lead that had leached from ancient plumbing systems.

The result? There have been 87 confirmed cases of Legionnaires' Disease in Flint, including 10 deaths, from June 2014 to November 2015, compared to only 10 cases a year as recently as 2013.

The stomach-churning pictures of discolored drinking water that has come out of the taps of the residents of Flint, Michigan has been flooding social media.

Sickeningly, state officials insisted for months that the water was safe, despite growing evidence that they had reliable information showing how toxic the water truly was. 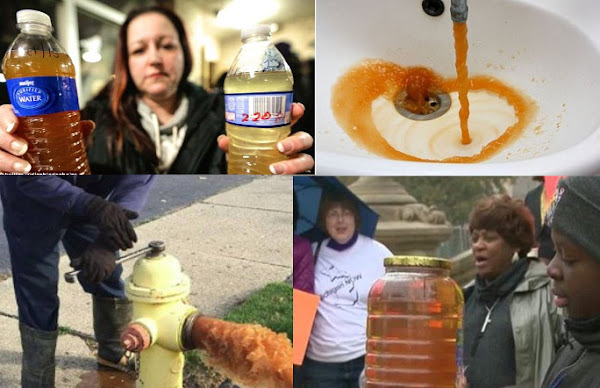 Everyone from homeowners to hospitals was affected by the contamination which saw water turn a dirty shade of brown...

...The financially strapped city was under control of a state-appointed emergency manager when it switched its source of tap water from Detroit's system to the nearby Flint River in April 2014 to save money.

Flint, which is about 60 miles northwest of Detroit, returned to using that city's water in October after tests found elevated levels of lead in the water and in the blood of some children.

The more corrosive water from the Flint River leached lead from the city pipes more than Detroit water did, leading to the problems.

But, hey, folks: keep voting Democrat. I'm sure things will get better!

Longtime Flint advocate Michael Moore could not be reached for comment; a spokesman implied that he was sleeping off his afternoon snack of a large Domino's double-cheese pizza and a sextet of brownie bites.

Isn't the Governor a Republican? While its Democrats who bankrupted the state forcing governor to cut cost. Its still his responsibility for switching water supplier and not have any quality control or correct any mistake when he realize the water was dangerous

Yes, anonymous person, governor Johnson is a republican.
Current Mayor Walling is a Democrat.
Mayor Williamson (2003) was a Democrat.
Mayor Buchannan was... never mind. All of the mayors of Flint
were Democrats back to the day they killed the last woolly mammoth
to make seat covers.
President Obama is a Democrat; it would be silly to blame Obama
for management of water for the city of Flint and i don't.

Wikipedia tells me that in 2006 Flint was voted the tenth most
liberal city in the USA by the bay area center for voting research
-whatever that is -
and has been on the FBI list of the top five most violent cities
2007, 08 and 09. In 2010 the FBI declared Flint to be the forth
most dangerous city based on its murder rate.
As of 30 April 15 the city has been in financial receivership.

No, it is not the Governor's responsibility to control Flint's
water and for correcting the mistake he is using the national
guard and Obama has just yesterday declared it a state of
emergecy so some FEMA money ($5million to start) can help
get water trucked in.

But you can blame the Governor for local water utility choices
if you want. Or the United Nations. Or the michigan militia.
Just keep passing the buck until it his a Republican.