In her interview on Face the Nation yesterday, a tired-looking Granny Catlady stumbled on new questions about her treatment of classified information while Secretary of State, including a revelation that she instructed an aide to strip a secure document of its classification markings and send it via insecure means. In government circles, that's called a felony.

The elderly lover of cats struggled to explain her message to remove security designations from a fax and "Send Nonsecure":

CBS’S JOHN DICKERSON: “This week another batch of your emails were released by the State Department. One of them is a back-and-forth between you and a staffer about a secure fax that won’t come through and you directed him to ‘turn into non-paper with no identifying heading and send non-secure.’ Aren’t you ordering him to violate the laws on handling classified material there?”

CLINTON: “No, not at all, and as the State Department said just this week, that did not happen and it never would have happened because that’s just not the way I treated classified information. Headings are not classification notices and so often times were trying to get the best information we can and obviously what I’m asking for is whatever can be transmitted. If it doesn’t come through secure to be transmitted on the unclassified system. So no there is nothing to that like so much else that has been talked about in the last year.” 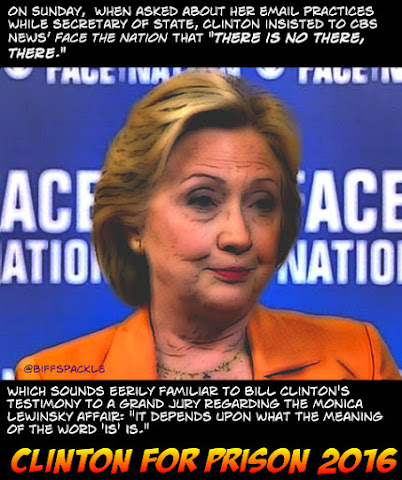 DICKERSON: “So in no instance -- what’s striking about that particular email suggests you were very facile with how to do this, this process. You knew the instructions about how to get around the restrictions for sending classified information. So your saying there was never an instance, any other instance in which you did that?”

CLINTON: “No, and it wasn’t sent. So, I think, you know, this is another instance where what is common practice, namely look I need information, I had some points I had to make, and I was waiting for a secure fax that could give me the whole picture, but often times there is a lot of information that isn’t at all classified. So, whatever information can be appropriately transmitted unclassified often was, that’s true for every agency in the government and everybody who does business with the government. But the important point here is I had great confidence because I had worked with Jake Sullivan for years. He is the most meticulous, careful person you could possibly do business with and he knew exactly what was and wasn’t appropriate and in fact as the State Department said there was no transmission of any classified information. So, it’s another effort by people looking for something to throw against the wall, as you said in the beginning of the program, to see what sticks, but there’s no there there.”

DICKERSON: “Well, this one is a little different since the FBI is investigating this specific question of whether a classification was meddled with.”

Clinton's evasive responses reminded me of her husband. You know, what the meaning of the word "is" is.

In a related matter, the AP reported that the State Department has refused to say whether the document in question was classified or not. Which means, of course, that it was.

Finally, the funniest part of the interview related to an email in which Hillary expressed confusion that one of her employees was using, yes, you got it, a personal email account.

DICKERSON: “Let me ask you about another email in this batch, which was one in which you seemed to express surprise that somebody emailed on their non-State department personal email, which is what you were doing. Why was that a surprise to you?”

The Clinton family has been lying so long, and so egregiously, that they don't even understand how absurd they sound.

They both need to be thrown in prison for a very long time, just as the rest of us peons would have been had we engaged in the kind of skulduggery this pair has.

When you are honest and tell the truth, when you are not a criminal posing as a greedy self serving government employed oligarch, answers are so easy even the little people can do it.

Why is she still able to run for President

That last question is easy enough, because democrats don't care.

More to the point WHY would Democrats even consider voting for a presidential canidate that could end up in prison. Could she run the country from prison, even a country club 'Club Fed' ? Would foreign dignitaries be driven to prison, be submitted a 'frisk' and visit the orange jumpsuit Chief Executive?

Democrats - is Hillary the very best person for this job you have ? The VERY best ?