In a Friday Bloomberg op-ed, Ramesh Ponnuru details how “immigration is rapidly becoming a defining issue for American conservatism.” Ponnuru suggests that this may prove problematic for donor-class favorite Sen. Marco Rubio (R-FL), who supports immigration expansions—which Pew Research says are opposed by more than 9 in 10 GOP voters.


Just as conservative candidates for President cannot be selected if they support abortion, Obamacare or gun control, Ponnuru explains that the new litmus test of conservatism is immigration. “Conservatives are now starting to see a candidate’s position on immigration as an index of his conservatism in general,” Ponnuru writes.

Abortion politics followed a similar trajectory. Opposing abortion wasn’t always considered part and parcel of conservatism. Everybody considered Senator John Tower of Texas a movement conservative even though he supported legal abortion. Over time, though, as conservatives grew more opposed to abortion and liberals more supportive of it, it became an issue that voters used to sort candidates by ideology… voters who knew that a candidate opposed it could also be reasonably sure that he would oppose gun control and tax increases — or, at least, that he was more likely to oppose it than someone who favored legal abortion. Candidates who favored legal abortion started to have real trouble getting support from a lot of conservative voters. Eventually, such candidates came to be seen as not being conservatives at all. Today, favoring tighter control of immigration is becoming a stand-in for conservatism in the same way. 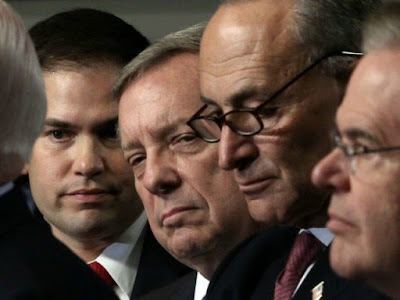 When asked about what she viewed as the biggest fight within the GOP today and the most pressing issue currently facing the country, Schlafly— without hesitation—said, “Immigration. And that’s why Trump is doing so well… if we don’t stop immigration, this torrent of immigrants coming in, we’re not going to be America anymore.”

Ann Coulter has similarly argued that the reason this election cycle’s presidential debates have been so uninteresting is because the moderators keep asking questions about ideological battles within the GOP which have already been settled—such as abortion— while avoiding the current war within the Republican Party, which centers upon immigration.

In August, after the first Republican presidential debate, Coulter wrote on twitter: “We won the abortion fight (in the GOP) 30 years ago!” and added, “Absolutely, positively no GOP candidate 4 POTUS will ever be for abortion,” concluding in all caps that “IMMIGRATION IS THE NEW LITMUS TEST”.

…everything wrong with Washington. It was a bill written of, by and for the special interests. Despite today’s record high immigration—and four decades of stagnant pay–the Gang of Eight bill doubled the number of foreign workers allowed into the country every year. And it tripled the number of permanent residents added over its first decade. This is a hammer blow to working Americans. Our nominee needs to serve the 92% of GOP voters who want to constrain future immigration growth–not expand it even further. That’s the immigration reform voters want.

At a recent event in Daphne, Alabama, Sessions warned that “This election is going to decide–did the crowd who pushed that bill, are they in the White House? And will they be able to continue their agenda? Or will somebody else be there who will say, ‘No.'”

The open-borders enthusiasts in Washington, Sessions explained, “are not through. They are determined. They’ve got money, interest groups, power, media that support this agenda and the next president who gets elected is going to determine what kind of immigration system we have.”

Ponnuru seems to recognize that the emergence of immigration restrictions as a tenet of conservatism has perhaps hurt Sen. Marco Rubio, who co-authored an immigration agenda which, in Ponnuru’s words, “would increase legal immigration, allow many illegal immigrants to become citizens, and start them on that path even if new enforcement measures against further illegal immigration turn out to be ineffective.”

Tonally, Ponnuru’s declaration that immigration has become a part of “conservatives’ creed” seems to represent an evolution for Ponnuru— a so-called “Reformicon” whose movement was closely aligned with immigration expansionist Eric Cantor, Ponnuru’s own views not withstanding.

His recent writing seems to suggest that he now recognizes with greater force the potency of the immigration issue amongst the GOP electorate. However, Ponnuru explains that despite Rubio’s opposition to the Republican electorate on this issue, he could still snag the nomination. “Rubio could win even if opponents of his immigration record successfully define him as an ‘establishment’ candidate,” Ponnuru writes. “After all, parties usually nominate establishment candidates.”

This suggests that Rubio’s opponents may have to shift their strategies— especially as more progressive Republicans running alongside Rubio drop out— and instead focus on how Rubio’s immigration positions put him outside the mainstream of American thought. Senator Sessions, for instance, has repeatedly described the policies enshrined in the Gang of Eight bill as “extreme,” and “radical.” A poll conducted by Kellyanne Conway, for example, found that by nearly a 10-1 ratio Americans reject the platform of importing more foreign workers that has defined Senator Rubio’s career. Further, by a nearly five-to-one margin, GOP voters believe so-called “free trade,” lowers wages rather than raises them, and yet Senator Rubio provided the pivotal 60th vote to fast-track Obamatrade and described Obama’s Trans-Pacific Partnership agreement as part of the “second pillar” of Rubio’s three-pillar foreign policy strategy.

FiveThirtyEight’s Nate Silver has explained how the Republican establishment could throw the 2016 race to Rubio. Silver explains that this is because the Establishment has the “persuasive power to set the rules of engagement and strategically encourage winnowing of the field”:

Imagine that the party establishment is the referee in a boxing match. It has one boxer it would prefer to see win. But it can’t rig the match once it’s underway. However, it can choose when to call the fight. So if its preferred boxer — let’s call him Red — is winning early, it can call the fight after a couple of rounds. But if he’s losing, they can let the fight keep going and hope he prevails on the basis of his stamina…he’s getting a lot of second and third chances when his opponent might not. And that makes his overall odds pretty good. He just has to lead at any point and the refs can call the match.

Should this effort to install Rubio as the nominee be successful, it would mean a maximum of seven percent of GOP voters would have their views represented on immigration levels. According to Pew, only 7% of GOP voters want more immigration; since Rubio’s plan would have tripled green cards, the share who support Rubio’s vision is likely substantially smaller than seven percent.

Over the next ten years, the U.S. will issue more green cards than there are men, women and children currently living in Iowa, New Hampshire, and South Carolina—on top of the 59 million immigrants already admitted since 1965. Rubio’s push to expand the record rate of immigration even higher will, ironically, disenfranchise the GOP voters Rubio is courting.

Pro-amnesty lawmaker and mass migration supporter Rep. Trey Gowdy (R-SC), who has endorsed Rubio, received around 126,452 votes in his last election; in the span of one decade, Rubio’s bill would have brought in 261 immigrants for every one Gowdy voter. Pro-amnesty lawmaker Rep. Jason Chaffetz (R-UT), who similarly endorsed Rubio, received around 94,571 votes—or nearly three times less voters than Muslim migrants admitted to the U.S. each year. Yet Rubio’s new I-Squared bill dramatically expands Muslim immigration.

As it stands now, 76% of Republicans oppose stricter gun control while 92% percent oppose more immigration, meaning that the party’s electorate is more opposed to Sen. Rubio’s foreign worker policy than they are to Democrats’ push for tighter gun control laws.

When your enemies are given the opportunity to define you, it calls for a srategy to push back. Sorry to say, Repulicans lack the heart, the balls and the spine to define the battlefield. Reaction is a poor substitute for action. Go Trump

What these self inflated mandarin clowns and traitors are doing is going to redefine the entire elitist power structure as we know it.
They are fossils they just don't know it. Yet.
It is going to be their demise.
They are playing with an inferno.

To anonymous at 8:40pm. Trump is first and foremost a businessman. If you think that he is truly against "immigration", you are fooling yourself. Cheap labor is appealing to Trump just as much as it is to Tom Donohue of the US CofC. Trump is a phony, campaign conservative who is best buddies with the Clintons. Please don't be fooled by his bombastic, phony promises. We already have a tyrant/dictator as a president, Trump would be no different.

To mtnforge said: Bravo. I agree. Take away our guns? LOL. United we stand. Divided we fall. That is what Obama and his comrades want. When it comes to taking away our right to bear arms - they don't stand a chance. BUY GUNS NOW. Defend your right to your freedoms.

While Cruz is great for America, you get trumped with the world's need of Mr. Donald J. Trump's leadership.

It is that important now.

Marco Dondi {as in the comic strip, Dondi} and the gopE are both dead to me. I am sick and tired of being betrayed by them. Dondi was warned back when he was pushing his Gang of Eight Bill, when he made the rounds on the Talk Show circuit that he was being set up. He maintained that he wasn't and wouldn't allow it. Dondi now speaks with forked tongue, he makes appearances on Latino media saying what he really will do if elected, for for amnesty.

I am for Ted Cruz, but fear if he ends up with the nomination he will be hit by all sides including the gopE. I'm not sure he will be able to sustain that attack. If Trump is the nominee, he has the money and the fortitude to fight back. He has set the Clintonista's back on their heals, including Bubba. That is something the gopE has never had the fortitude to do, to include the demoCrap party.

I am DONE with the gopE, the last time I intend to vote for any gop'er is this election and that will be for either Cruz or Trump. Say hello to your Whig brethren on your way down. You don't have a clue as to what is about to hit you, none!

Don't get stuck in the weeds my friend. Ponnuru, as many Indians are inclined, like to create boxes to understand our cultural issues. I find such definitions restricting and counter-productive. I am not whole hog for the Donald, but I do want to see someone ruthlessly fight back, mix things up, and let a new paradigm settle into place.