Mayor Dayne Walling, a Democrat, led a cheerful countdown at the Flint water treatment plant to press the button moving the city over to river water. Walling and Darnell Earley, the Democratic emergency manager, even raised glasses in a toast and drank the water to show that it was safe.

“It’s a historic moment for the city of Flint to return to its roots and use our own river as our drinking water supply,” Walling said. “The water quality speaks for itself.”

Flint’s city council had voted in favor of the move 7-1. Despite claims about the power of the emergency manager, the switch could not have gone forward without that vote.

Even once the problem had surfaced, the EPA knew and kept quiet. It was only once the crisis broke, that the Democratic establishment attempted to redirect the blame at Michigan’s efforts to fix broken Democratic cities like Flint using emergency managers. The war against the emergency managers is not about clean water; it’s about protecting the dirty Democratic politics that destroyed these cities.

Flint’s dirty water had its origins in dirty politics. The Democratic Party had badly mismanaged the city.

Flint was trying to cut costs, but not in the right place. Water rates were already murderously high, because around 40 percent of the city’s water was leaking out or being stolen. Water theft is routine in failed Democratic cities like Flint. And the thefts often come from the inside. 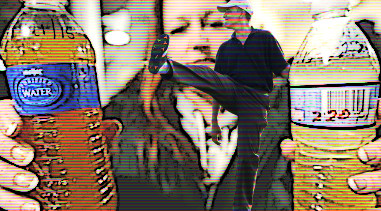 Warren Southall II, a Flint city employee, illegally turned on water in exchange for bribes. Last year he was fined, but would not serve any jail time. Illegal water hookups are everywhere. Residents who have their water turned off can always find ways to get it turned back on again. The cost gets passed on to those who pay their bills. And the rates go up and more residents run away.

From 2002 to 2010, Flint’s population declined by 18%. The poverty rate encompasses over a third of the population. Barely half the city works. The second largest employer in Flint is government.  The third and fourth largest employers, healthcare and education, are heavily government subsidized.

Flint is a failed city. It’s what happens when Democrats run a city into the ground by driving away jobs and pandering to unions. Eventually the union contracts make a city’s finances unfeasible and the cycle of tax hikes, union contracts, unfunded pensions, welfare protests, junk bond sales and then crisis management and privatization takes its toll. That is exactly what happened in Flint.

Flint got deep into trouble because of its unions. The city has been desperately struggling to privatize as much of its services as it can, wiping out union jobs to protect union retirement benefits, and then cutting services to cover for a growing deadbeat population that wants services, but doesn’t want to pay for them. And the simple fact of life is that somebody has to pay for clean water. Or it won’t be clean.

It wasn’t corporations or big business that made it impossible for Flint to pay its bills. It wasn’t Rick Snyder.  It was Flint residents who kept voting for ridiculously incompetent Democrats.

Flint, like Detroit, needed emergency managers because the Democratic Party had destroyed entire cities. And it is those emergency managers, who are often African-American Democrats even when appointed by Republicans, who are being used to pass all the blame on to Governor Rick Snyder.

But they are leaving out a whole lot of history along the way.

In 2002, Woodrow Stanley, the three-term Democratic Party mayor, was removed from office by angry voters due to a $30 million deficit. He didn’t accept the blame for the disaster. Instead he blamed racism.

“The stench of racism that reeks [from] this election will linger in the nostrils of this community for decades," Stanley said. In reality, plenty of black voters had turned out to drive him out of office.

After a state takeover put Flint back in the black, Woodrow “I Blame Racism” Stanley faced off against Don “The Don” Williamson, a convicted criminal and car dealer. The Don won and running for reelection, he told residents that, "I don't lie to nobody! The city is the most solvent in the state of Michigan."

Flint was as solvent as Detroit. In reality there was a $4 million deficit. Williamson was accused of lying about the deficit to get reelected. Around that same time, Time named Flint the “most dangerous city in America”. After a threatened recall election, Williamson resigned and decided to run for governor as a Democrat while claiming, "I'm going to go down as the greatest mayor this city has ever had."

Governor Jennifer Granholm had unleashed the disaster by signing an executive order ending the state of emergency in Flint and claiming that, “The citizens of Flint can take great satisfaction in that the financial cloud that has lingered over the city has been lifted.”

“I expect the city to remain on sound financial footing into the future,” the failed Michigan politician, who would enjoy a brief career working for Al Gore’s ultra-leftist Current TV before losing her job due to the Al Jazeera sale, claimed.

Flint’s real problem is that it had far too many expenses, far too many employees and no money. Like Detroit, it was another failed Democratic city that residents were fleeing as fast as they could. The only people left behind had no option to move anywhere else. They wanted services, but they weren’t paying taxes. Income tax revenue in Flint fell by almost a third in four years.

Flint needed its emergency managers; it had to drastically cut costs, because it couldn’t pay its bills. It wasn’t the Republican governor who made Flint into a financially unviable proposition.

Democrats want to annex suburbs and drag them into paying the bills for failed cities. These ideas find favor within the White House. But that just widens the sphere of economic destruction. It encourages people to flee even further to escape the economic event horizon of disasters like Flint and Detroit.

And it avoids the moral question of whether the innocent should be forced to bail out the guilty.

The left reduces such questions to matters of pure entitlement. Everything is a right. But the Flint disaster shows the practical cost of entitlement. In the end there is still a bill. And when the bills aren’t being paid, then cities will find ways to cut costs that carry with them their own price.

Socialism works until you run out of other people’s money. And that’s when the death panels kick in. It’s when your electricity stops being reliable, the cops don’t show up when called and your water stops being clean. There’s no way to escape these simple economic facts of life.

Democrats turned Flint into a deadbeat city. A deadbeat city with high crime, high rates of structure fires, lots of potholes and failing services. Flint, Detroit, Newark, Oakland, Chicago and a hundred other failed and failing cities are their handiwork. And as long as their residents continue voting for the same party that made this mess, their lives and their services will only get worse.