WE GOT A BLEEDER! Donald Trump Bails out of GOP Debate, Fearing Questions From... Megyn Kelly

I find it somewhat odd that a man who fancies himself a master negotiator ready to face the world's toughest dictators is so fearful of questions posed by Fox anchor Megyn Kelly that he has bailed out of the final Republican debate.

...Republican presidential front-runner Donald Trump said on Tuesday night that he is backing out of Thursday's primary debate in Des Moines, Iowa, which will be broadcast by Fox News Channel.

Trump had been publicly mulling the move for a few days, complaining that Fox News host Megyn Kelly, one of three moderators for the event, is biased against him... 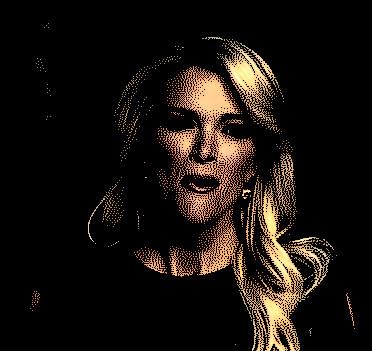 ..."We learned from a secret back channel that the Ayatollah and Putin both intend to treat Donald Trump unfairly when they meet with him if he becomes president," Fox News said in a tongue-in-cheek statement. "A nefarious source tells us that Trump has his own secret plan to replace the Cabinet with his Twitter followers to see if he should even go to those meetings."

...Trump has had it in for Kelly since the first primary debate in August, when she questioned him about disparaging remarks he has made about women with her opening question.

...He said the next day that Kelly had "blood coming out of her wherever" when she confronted him — a remark that was widely seen as confirming the very kind of sexism she had asked about in the first place.

Some insiders attribute Mr. Trump's reluctance to debate on another dirty "little secret":

The Fix's Chris Cillizza shared a little secret before the last GOP debate a couple of weeks ago: Trump isn't a great debater. Well, here's another little secret: He knows it.

I suspect Cillizza is on the right track.

Leading nationally, Trump has little to gain by debating with Cruz and a lot to lose.

Acting intimidated by Megyn Kelly, though, may finally be a bridge too far.

What a childish bullying wimp Trump is.!
Maybe we will now have a debate with substance.

A yuge mistake on DonALL Thump's part, could give Cruz the edge he needs to pull out a win.

I am a fan of Megyn Kelly but she should've stayed above the fray and not address the issue tonight and let her cohorts deal with the issue. Lately she has caught a dose of o'reillyitise and it isn't wearing well on her. She is getting real full of herself lately.

The Donald is having his own personal Lt. Col. Ralph Peters Moment

Never mind the fact that at every event he has held when he bashes the media people stand and cheer. This includes Fox

The media treats Dims with kit gloves and chews up Republicans, How many times have you said to yourself over the years after watching debates I wish they would stand up to the press.

Megyn is the bleeder. Not wanted or liked here. Good on Trump. Not even absolutely I am for Trump, but I'm definitely not with FOX or their whore.

Sorry, but I have had seven years of President Stompy Foot and I don't want another to follow him. I am sick of narcissist presidents and that is all Trump would be, just another narcissist where we would could the number of "I, Me" in his speeches.

I railed on Democrats for buying into the Cult of Personality with Obama. I will not cut slack on Republicans that buying into the same lack of substance "Hopey Change" just because it's coming from someone who now claims to be a Republican.

Basically to some it up we have a 3rd party candidate running in the Republican party.

After working for and with the GOP/RNC, donating, cold calling, canvasing districts making sure they win and take control of House and Senate.

Which they did, i was really proud and thankful. I really felt like i made a deference.

Then i saw them take the power i worked so hard for and turn around a give the Dimms and Obama everything they wanted year after year, zero checks and balances just roll over turn tail and run.

Watching those press conferences with Nancy Pelosi and Chuck Schumer smiling and laughing that the Republicans gave them more than they could ever hope for.

That was the final straw for me, the Republicans gave us Trump by the fail actions, so lets lay the blame where it belongs.

We gave them what they wanted and they failed us all, not just some but all of them are guilty at this point.

RNC/GOP have been picking the candidates for years and they have lost every-time.

The last prez race should have been a easy win for the party, but they picked Romney a wealthy insider how ran from his wealthy. The same guys policy's that were the ground work for Obama care. Go figure that one, or better yet just try and explain it.

Trump embraces his success and his wealth. Contrast that with your sad devotion to a party that done more harm than good with all they have been given.

Its not a cult that drives Trump supporters. Its someone willing to say what needs to be said, mixed with major let down of those that were given what they wanted.

We are witnessing a tidal shift in the electorate thanks to the RNC/GOP.

Fear is one hell of a motivator, and we got plenty of it to go around at this point in time.

Nah, this is brilliant. What, you've never used the tactic of refusing to come to the table or walking out on a negotiation? Trump is wonderfully showing FOX and their princess how irrelevant they are and how he could not give a shit what they think . . . and people will love him for that. He knows his absence will be the elephant in the room, so he will still be front and center. The other candidates and FOX will outdo themselves to act all prim and proper now that the loudmouth is gone . . . and the debate will become boring as hell, and those few watching it will turn it off.

What next? Will the Donald threaten to hold his breath until he turns blue?
He has the perfect opportunity to shove it up Fox's collective butt by answering
any question put to him and showing his mettle. Instead, we get a stunt worthy
of a snotty 2 year old.

Reagan skipped the last IA debate to, and went on to win in a landslide. DOH!

This isn't a debate, it's a negotiation. He setting the stage for how he wants things done in the future. Knowing when to be at the table and when not to be takes real art. See: Reagan. See:Mugabe. Disparate examples of the same thing.

The desperation of Cruz supporters is palpable. Buckley said, support the most conservative candidate who is electable. Cruz is not that candidate. His eligibility is not even certain. If nominated, he likely would be challenged by the DNC, and that's before he loses everything up the coast, from South Carolina northward.

The ploy with Romney worked; select a problem candidate, then expose and destroy him from within. The poor man was probably the last to know, trusting as he was. I'm not so trusting.

If Trump is the new TR, that's plenty good.