With the Iowa caucus less than two weeks away, Sen. Marco Rubio (R-FL) is refusing to answer questions about how he would vote on the Trans-Pacific Partnership deal until after voters have gone to the polls.


Rubio’s decision to conceal his position from voters comes after he previously declared that TPP would be a foundational “pillar” of his hoped-for presidency if elected.

According to a report from the Tampa Bay Times, Rubio told reporters on Jan. 7 that he will not reveal his position on the very trade deal he voted to fast-track until May 18th— two months after Super Tuesday.

This seems to highlight the tension Rubio is facing: at once being the Republican donor-class favorite, while trying not to advertise his beliefs so transparently that it further hurts him with voters.

More than three months after the Trans-Pacific Partnership deal was finalized, Marco Rubio remains undecided on his support. 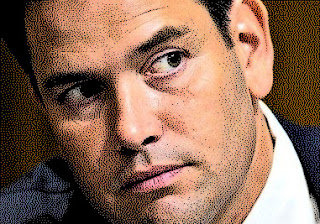 “He is still in the process of reviewing it,” said his Senate spokesman, Alex Burgos

In a withering attack on Cruz during last week’s debate, Rubio accused Cruz of flip-flopping on giving Obama fast-track authority on trade. ‘You used to support TPA, now you say you’re against it,’ Rubio said, correctly.

If Rubio follows Cruz in opposing the actual deal, it would be a notable departure. Rubio has been a vocal advocate for the idea.”

Indeed, Rubio had previously endorsed the pact. As the Tampa Bay Times noted, “In May [2015], during a speech at the Council on Foreign Relations, Rubio said it was ‘more important than ever that Congress give the president trade promotion authority so that he can finalize the Trans-Pacific Partnership and the Trans-Atlantic Trade and Investment Partnership.'”

In that address, Rubio described TPP as the “second pillar” of a President Rubio’s three-pillar foreign policy.

In an April 29 op-ed in the Wall Street Journal, Rubio wrote: “We must rebuild our own military capabilities, conclude and pass TPP, and renew our support for freedom and the rule of law in Asia.”

While Rubio has been criticized for missing critical votes in the Senate, one vote Rubio did not miss was the vote to fast-track the Trans-Pacific Partnership. Indeed, Rubio cast the 60th and deciding vote to liberate Obama’s global trade pact and any future such pacts from the Senate filibuster, amendment process, and constitutional treaty vote. Additionally, under fast-track rules, the White House sends Congress the implementing legislation, taking the pen out of lawmakers’ hands.

The Tampa Bay Times implies that after Rubio’s “support [for TPP] came under attack from some conservatives,” Rubio began to dodge questions about how he would vote on the deal, which he had already endorsed. “When the deal was formally minted in October, Rubio said he would have to review it,” Leary writes.

In an update to the story, the paper further explains that “Rubio on Jan. 7 told reporters that he was waiting on a report from the International Trade Commission.” However, according to the Washington Post, that report is not due to be released until May 18th— two months after Super Tuesday. By the time the report is expected to be released, there will only be six GOP primary state elections remaining—meaning that Rubio is refusing to tell Republican voters what he would do until they have already voted in 44 states.

Moreover, Sen. Rubio’s office’s claims that “he is still in the process of reviewing” TPP seems to suggest that the Senator is unfamiliar with the core text of the deal. This statement is significant given that Rubio claims to have read the TPP before voting to fast-track it.

In June of last year, Breitbart News sent Rubio a series of questions asking him to demonstrate that he actually read the TPP before voting to fast-track it. Those questions included: Did Rubio go to the secret room to read the text of the TPP deal; how long did Rubio spend in the room reading the deal; did he bring any staff with him, and, if so, which staffers; did the Senator take notes; and did the Senator think that the secret log, which the Senate uses to keep track of which members of Congress visit the room to read the text, should be made public.

As Breitbart reported in June, “Rubio’s office has consistently and repeatedly refused to answer the simple question of whether he had visited the secretive room inside the Capitol where lawmakers are allowed to read the TPP text.”

However, despite the repeated refusals of Rubio’s office to answer these questions, following Breitbart News’ original reporting, the National Review published a piece declaring, “Yes, Marco Rubio Read the TPP.” The article claims that according to Rubio’s office,“Senator Rubio read the TPP text weeks ago.” However, the article provides no evidence to substantiate Rubio’s claim, such as the day Rubio even allegedly spent the hours necessary to read the deal.

Because the bill was not made public before the fast track vote, U.S. citizens were completely reliant upon their Members of Congress to inform them of what is in the deal. And if those Members voted to fast-track the deal, it meant that they were permanently surrendering their opportunity to amend it if there was language they did not like.

As one final wrinkle, the National Review reporter who unquestioningly declared that Rubio had read the gargantuan, complicated trade pact before Rubio voted to fast-track it, has since moved on from the National Review and is now ensconced as a member of Sen. Rubio’s campaign staff.

While naturally changes have been made to the text in the now public version, the areas of concern that make up the core of the TPP— identified by Sen. Jeff Sessions (R-AL) during the debate on whether to give Obama fast-track trade authority— are still present. For instance, article 27.1 “The Establishment of the Trans-Pacific Partnership Commission,” contains the very language Sessions warned about during the TPA fight, which would lead to the establishment of an international governing commission. In a November 5th statement, Sessions confirmed:

This new structure is known as the Trans-Pacific Partnership Commission – a Pacific Union – which meets, appoints unelected bureaucrats, adopts rules, and changes the agreement after adoption… This global governance authority is open-ended… It covers everything from the movement of foreign nationals… to climate regulation… At bottom, this is not a mere trade agreement. It bears the hallmarks of a nascent European Union.

Thus, had Rubio gone to the room and studied this section of the deal like Sessions had, today Rubio would have sufficient cause to oppose the deal on those grounds alone. Thus, the following options seem to be true: either Rubio never read the deal before or after the vote, or Rubio has read the deal and doesn’t believe that a new international governing commission is cause for concern.

Rubio’s refusal to tell voters how he will vote on the Trans-Pacific Partnership that he endorsed and fast-tracked has been enabled by the fact that he has yet to be asked a single question about his support of the deal during any of the Republican debates.

Yup, if you want to know my position on things then vote for me. Rubio is jerk. He is my representative and was useless when I wrote to him with a problem that only Congress could fix. I got a form letter telling me it was not within his control. I figured I went wrong by not enclosing a $100 bill in the envelope.

Obamatrade is terrible and probably unconstitutional. It will change the way the United States makes its laws and permanently open its borders.

Any politician who doesn't tell you right away that Obamatrade stinks should be voted out of office.

Hopefully he will learn much once this campaign is over. Think about your future as a republican.