WHAT THEY’RE HIDING FROM YOU: Trump 'Silent Protester' Is a Supporter Of Islamic Terrorism

There have been widespread calls for Presidential front runner Donald Trump to issue an apology to Rose Hamid. You’ll recall that Hamid was the woman who silently protested a Trump campaign stop before being ejected from the event by security.

But as has often been the case with political plants at Republican events, the public was only given part of the story.

In reality, Rose Hamid isn’t a silent follower of the religion a peace, but rather, an ardent supporter of Jihadist activities, having gone so far as to refer to jihadi terrorism as “resistance against occupation.” Moreover, she personally promoted an event held by one of the terrorists responsible for the bombing of the World Trade Centers in 1993 and by doing so directly supported his calls for the creation of an Islamic state under Sharia law in the United States of America. 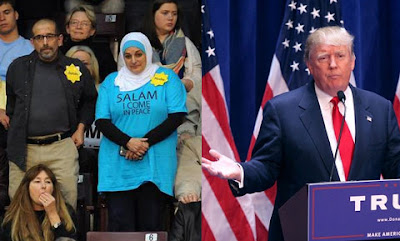 Rose Hamid, an Islamic protester who made headlines when she was removed from a Donald Trump rally in South Carolina Friday night and attempted to position herself as a victim of ‘Islamophobia’ thereafter, has a history rife with extremist advocacy...

...Throughout this fiasco, Hamid has frequently been described as an innocent bystander without a political agenda– a mere citizen who wanted to share her voice.

But Breitbart News has learned that Hamid is not simply a “flight attendant,” but is also an Islamic activist who apologizes for Palestinian terrorism and promotes radical Imams.

As President of the Muslim Women of the Carolinas, Hamid has consistently promoted anti-Israel propaganda and has excused Palestinian jihadi terrorism as “resistance” against “occupation...”

...Hamid’s Muslim Women of the Carolinas group has in the past promoted an event with Imam Siraj Wahhaj, an unindicted coconspirator in the trial of the 1993 World Trade Center bombing. Wahhaj, a 9/11 truther, has called for the creation of an Islamic state in the United States...

...Marty Rosenbluth, the man standing next to Hamid at the Trump event, is an anti-Israel activist, a proud Communist, and a Sen. Bernie Sanders supporter, according to comments made on his Facebook page.

Once again Democrat attempting to marginalize Trump have been caught red handed trying to paint a completely false narrative.

You should be done.

...You have a right to free speech in this country. You do not have a right to trespass on private property and disrupt an event, even silently. I do not recall anyone telling Ron Paul during the last election cycle that he owed apologies to the strippers that “someone” hired to infiltrate his event in Tampa; they, like Hamid, were escorted out.

Since the media won’t honestly report on who this jackal actually is and the positions she has taken in the past and neither will CAIR, it’s time for the rest of America to BOYCOTT these media outlets, all of their advertisers (yes, that includes you CNN) and anyone affiliated with or associated with either.

We know this is a stretch, but could it be that Donald Trump is being attacked for his views and the Democrats are throwing everything they have at him because he is simply saying what tens of millions of Americans in the silent majority have been thinking for years?

The 5th column media is a plague upon our way of life, our liberty.
Lying destructive evil traitors of everything good and wholesome in our great Republic.
It is almost beyond comprehension these people have so much hate and malice for America.
It is time to turn our backs on these foul creatures. They rely on us to listen to their lies, they desperately need us to buy into their narrative, whilst they use those very things to destroy the things about us that make us a moral and productive society.
It is time we withdraw our consent to their mischief and cunning shit stirring.
When we turn our backs we destroy them, nullify their malice, we delegitimize them, and they are exposed as the fools, and their agenda is vanquished.

I agree mtp. Stop watching CNN, MSNBC, FOX, ABC, NBC. They are all propagandists for the Obama regime. And, yes, FOX is also an arm of the GOPe RINOs, Rove and Tom Donohue's US Chamber of Commerce. FOX is NOT fair and balanced. If they were, they wouldn't try to marginalize Ted Cruz during the debates. Also, they would have dropped Jeb Bush and John Kasich to the 2nd tier if debaters in this upcoming debate. Jeb, Christie and Kasich and even Carson should NOT be in the top tier. Cruz, Trump and Rubio should be the only ones on the stage. All the others, especially Jeb, should fold up their tents and GO HOME. They are only in it to take away votes from Cruz and Trump and FOX wants a RINO moderate candidate to lose to Killary. Actually, Trump is a RINO as well. Ted Cruz is the only legitimate conservative running.