The Revolution That Will Either Destroy America... or the Left

Hillary Clinton and Bernie Sanders are the same candidate. They’re both leftist radicals with degrees in political science who held back some of their more radical ideas to pursue political office. In the two years that they served together in the Senate, they voted the same way 93 percent of the time.

They’re also political opportunists. Bernie Sanders, no less than Hillary, reinvented his political views, including his allegiance to Socialism, numerous times over the years. Sanders moderated his positions on everything from gun control to Israel when it helped his political career. He’s now modifying plenty of positions all over again in order to appeal to new and different voters.

Bernie Sanders is no more authentic than Hillary Clinton and she is no less radical than he is.

Both her attempts to appear mainstream and his efforts to seem radical are political poses that they deploy to bring in money and support from major blocs within the Democratic Party. Underneath the theater, Hillary Clinton is a longtime Alinsky fan while Bernie Sanders stumbles trying to update his views with the current obsessions of the radical left on everything from immigration to gun control to race.

The real struggle isn’t over beliefs, but over tactics.

While Hillary Clinton and her allies are attacking Bernie Sanders over his radical backing for Single Payer, in 1993, she told her husband that “managed competition“ was a “crock” and that “single-payer” was necessary.  Hillary had proposed her own version of “Medicare for All” and when asked if it would be a backdoor for single payer, said, “What are we afraid of? Let’s see where the competition leads us.”

As with many of her real positions, she backed away from it, but her explanation for it was telling. “Talking about single payer really is a conversation ender for most Americans, because then they become very nervous about socialized medicine and all the rest of this,” Hillary Clinton explained. 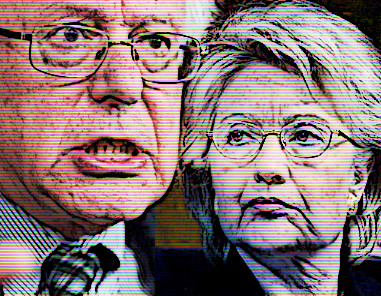 Clinton’s media allies don’t actually reject national socialized medicine when they criticize Bernie Sanders. They just believe, as she does, that the public is not ready yet to accept it.

Hillary Clinton is a radical whose strategy is pretending to be mainstream. As David Horowitz wrote about her, “It is possible to be a socialist, and radical in one's agendas, and yet moderate in the means one regards as practical to achieve them.” The classic example of this is H.G. Wells’ dialogue with Lenin in which he contended that the “essential difference” between the Evolutionary Collectivist and the Marxist was the belief that society could be transformed into a “into a Collectivist world system” without a violent revolution but “through a vast sustained educational campaign”.

This is a tactical debate that has significant implications for the lives of millions of American.

Bernie Sanders and Hillary Clinton are how the Democratic Party and its leftist masters are having a bar fight about how fast and how hard to move the country toward the left.

Hillary Clinton and Bernie Sanders are both socialists. The debate over the use of the “S” word is about whether Americans are ready to openly accept Socialism. That is the same debate they are having over socialized medicine, banking regulations and a dozen different issues. It’s not about what is right, they both agree about the final endgame, but over what Americans will put up with right here and now.

After Obama, some on the left believe that the country is ready for an aggressive radical push. Others however want to consolidate Obama’s gains because they are worried that too much of the policy infrastructure that he put into place, such as ObamaCare, is on the verge of collapsing.

This is much the same argument that Wells had with Lenin as he insisted that, “Communism was pressing too hard and too fast, and destroying before it was ready to rebuild. They had broken down trading before they were ready to ration.” Today that would mean that Hillary Clinton and her supporters want to stabilize ObamaCare and then use its success to advance to Single Payer while Bernie Sanders and his supporters want to use ObamaCare’s failure to move on to Single Payer.

This same scenario would recur across a thousand areas of American life. Bans, interventions and regulations would drastically accelerate even from the Obama high. Unlike Obama, Bernie Sanders would not wait until his final term to do his worst. He would begin doing his worst from Day 1.

Bernie Sanders has already become a political prop within his own campaign. The old confused radical pining nostalgically for politics that were old when he was young is being ushered from rally to rally to yell about the banks and revolution at the behest of the real contemporary radicals. A Sanders administration would see him a prisoner of the hard leftists who were seeking someone, anyone, to push their agenda.  If they can’t have Obama for a third term out front, they’ll settle for Sanders.

Sanders, like Obama, doesn’t really matter. It’s the people around him who set his agenda.

And yet he may be the biggest threat to the left’s agenda. The viability of the left’s American project has always depended on camouflage that hid its radical operations in plain moderate sight in the system.

Officially there is no left. There are only liberals or maybe progressives. There are dedicated public servants working to make life better for everyone. There are courageous reporters and committed activists. The media and academia used to deny to the death that they were of the left. Few Democrats were even willing to be called leftist because, like the Communist Party in the United States, the left wasn’t supposed to exist. And you couldn’t blame or oppose a thing that didn’t actually exist.

Bernie Sanders is putting the left on stage. And he’s pushing radical policies for which the left would be held accountable. That is why he really scares the more sensible parts of the left. They know that their strength lies in patience and concealment. They work within the system and avoid being seen as a foreign political movement with a Socialist agenda. That way even when something goes wrong, they duck the blame because there is never a distinct political movement that is associated with it.

The implications of a failed Bernie Sanders push to Single Payer terrify the left. The attacks on him by fellow leftists who also support Single Payer as an endgame are motivated by fear of exposure. They worry that a massive setback will undo their entire program going back to before Bernie Sanders was even born. And they are concerned about the consequences of radicalizing the country to the brink.

When Bernie Sanders shrieks about revolution, he is speaking in a political code that the left understands very well. It’s the same old debate between working within the system and radical destructive change now. Obama straddled the line, using rhetoric that told everyone what they wanted to hear. But Hillary Clinton and Bernie Sanders are incapable of walking that line. And in a party radicalized by Obama’s backers, revolution is much more popular than making the system work.

Revolution is the crucible in which the left destroys societies, but also ultimately itself.

The struggle is a symptom of a left that has tasted American blood and is losing control. The left has hijacked the Democratic Party and has amassed vast institutional power in the government, the educracy and the non-profit sector. It has even built up a great deal of power in the corporate sector.

Many of its activists and funders see few reasons not to push for the endgame right now. And that may prove to be their undoing. Even if it won’t be Bernie Sanders, the rush has begun for the revolution.

That revolution will either destroy America or the left.