What Conservatives Can Learn From the Radical Left

There are tactics and characteristics of the American left that conservatives would be well advised to emulate. Until these lessons are learned, conservatives will likely continue to struggle at the ballot box, and liberty will be but a noble afterthought.

Perhaps the most critical lesson to learn is that politics, and governance in general, is incremental. The ebb and flow of the political environment and the mechanics of governance move incrementally, either toward liberty and constitutional principles, or toward centralized planning and governmental hegemony. Every piece of legislation, policy statement, regulation, executive order, election, and every judicial decision moves the nation, a state, or a community slightly one direction or the other. It rarely moves all the way to one extreme or the other.

Many conservatives tend to look at each of the above events as an all-or-nothing proposition. If they can’t have absolute 2nd Amendment rights, it’s all wrong. If they can’t have completely free markets, the system is corrupt and it’s no good. If a candidate doesn’t agree completely with their perspective, they’re evil and cannot be supported, and they’re simply the “lesser of two evils.”

The long-term perspective significantly shapes incremental adaptation. Liberals seem to have a more long-term view of the process, and realize that each political victory is a rung on the progressive ladder. Too many conservatives suffer from severe myopia, mistakenly believing that if they can’t jump to the top of a ladder in one jump, they’ve failed, or that other conservatives have failed them if they can’t, or don’t, make the jump to the top minus the intervening steps. 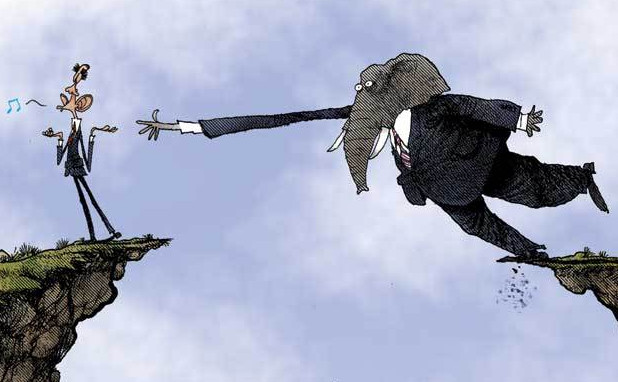 This tendency places some conservatives in the unenviable position of never being satisfied with anything. Since they can’t have things just precisely the way they want them to be, they will forever be unsatisfied, and politically unfilled. Liberals, generally, seem to relish each minor victory and recognize any politically incremental movement for what it is – one step in the process.

When we realize that every election and every other political activity takes us incrementally toward liberty, we begin realizing that each minor move to constitutionality and liberty is a victory, however small. And rather than bemoaning the failure to leap to the top of the ladder, relish the small victory, and gear up for the next battle for the next incremental triumph.

Closely related is persistence. When liberals don’t get what they want, they keep pressing ahead, until at last they persevere. When HillaryCare failed in the 90’s, the issue was placed on the back burner until they could muster the political clout to pull it off with the 2010 edition – ObamaCare. The old aphorism, “If at first you don’t succeed, try, try again,” should be the mantra of conservatives. Don’t give up, don’t give in, and if we fail, then try again until we succeed.

Liberals are masters of the compromise. In foreign affairs, they’re willing to concede large swaths of political ground for minor gains. For example, they assure a nuclearized Iran in 10 years, for little more than the appearance of having achieved a great deal for the U.S. But when it comes to domestic affairs, it’s just reversed. They will concede hardly anything in exchange for massive concessions from Republicans. This art is obviously a learned trait, and one that has thus far eluded conservatives. Until they can learn to at least meet halfway on issues of principle, conservatives will forever be the political doormats in American politics. Acquiescing and caving totally to the left not only emboldens the left, but it alienates conservatives from their political base and ideological constituency.

Granted, part of the lefts success in this regard is due to the fact that they have the media to advance their narrative. When congress presents a budget and the president threatens to veto it, liberals and the media all blame congress if the government is shut down for not presenting a budget the president can sign. If it’s vetoed, the president shut government down, not congress! Conservatives must learn to control the narrative, and shape the story in a way that ascribes blame where it belongs. President Reagan was able to do this, even without the alternative media that’s available today.

The left is organized, mobilized and energized at the grassroots level in such a way as to capitalize on technology and social media. Conservatives have come closer to creating a genuine grassroots organization with the emergence of the Tea Party. But even that is fragmented, sometimes regionalized, and parochial in nature. Until conservatives learn to master grassroots organization and mobilization, we’ll always be playing second fiddle.

Conservatives tend to be more defensive and reactionary, rather than aggressively proactive. We have constitutional principles – American principles – as our ideological foundation. Rather than sitting back and defensively trying to protect and preserve them, we’ve got to learn to be proactively advancing and bolstering them. Just as in sports, defense alone can’t win a game. There’s got to be an offense scoring points in order to win.

Liberals don’t seem to care how liberal their fellow ideologues are. They just care if they claim to be liberals, and if they subscribe to their broad dogma. Conservatives are often too consumed with whether one is “conservative enough,” or a “true conservative.” Consequently, we spend more time fighting amongst ourselves, pointing fingers, making accusations, and casting aspersions than we do in fighting the real enemies of liberty. A house divided against itself cannot stand, and as long as conservatives engage in this internal civil war, we will remain our own worst enemies. We can only succeed when we’re united.

George Washington claimed, “Liberty, when it begins to take root, is a plant of rapid growth.” America’s plant is withering, and if we’re to save it, we need to start working proactively together as freedom’s stewards.

Horse manure I say. When has the Left ever compromised except when faced with the Frankenstein mob with pitchforks and burning torches. Clinton signed welfare reform not due to compromise but because he was about to be run down by an Abhrams tank.

The Left never gives up, it never compromises.


The Right must understand that negiotiating with the Left is no different than dealing with Moscow, perhaps Moscow is more honest.

-- When we realize that every election and every other political activity takes us incrementally toward liberty... --

Glory be to God! I have seldom seen a more foolish statement from an intelligent and well-informed man -- and from Richard Larsen, at that!

Gradualism is not a weapon the pro-freedom community can use. It's solely useful to the Left, because embracing it destroys the principles of right and justice that freedom requires:
-- Individual rights;
-- Restriction of government's domain of legitimate activity;
-- Due process of law, strictly defined;
-- the condemnation of "compelling government interest" and "living Constitution" BS.

For example, the right to one's honestly acquired property is an absolute: a principle of right action. Once a principle has been compromised, it has ceased to exist. Here's the statist attack, which has been phenomenally successful:

-- You don't have an absolute right to your property, but only the fraction the government doesn't need right now. --

How do you restore the principle, and armor it against subsequent encroachments, "gradually?"

Well-written, but based in it's entirety on a false premise. Conservatives are NOT losing, and what better evidence of that than the 2010 and 2014 cycles? The Democrat party is the weakest - in representative government, at least - than it has been since the Civil War. The Left no longer needs legislative strength, when they control, so to speak, nearly everything else BUT Congress.

No, their fatal flaw is in the assumption that the characterization of them by the Left is correct. With no identity they trumpet, no clear agenda they champion, and reliance on a leftist sycophant media that has them convinced that victors or not, media is their mouthpiece, and they've come to believe it. This is the same media in disarray because one candidate not only speaks over them directly to his supporters, but rejects any and all of their assertions that he isn't doing just that.

Having no messaging, Republicans feel they must be quietly virtuous, ideologically perfect, and win the good war with one big all-in-one effort, while giving innumerable battles away, incrementally. The intended big recovery never comes, having lost the will to win the small things. So we get big intent, riddled with little failures. If you cannot be trusted in the little things, the big victories rarely if ever present themselves.

The Left are like ants, coming at you incessantly from all directions. Walking away from a thing they and the media are all telling you you must do, is the equivalent of a can of Raid.

Inherent in the dangers of factions Madison warned of, is the need for compromise. Subverting one's principles willingly because failure is assumed isn't merely weakness, it's also lack of cultivated skill. To reject leadership that can teach by example is not only a loser mindset personified, it guarantees failure on an even grander scale.