THE ULTIMATE TIMELINE: The Diabolical "Fast and Furious" Scandal

Below is a painstakingly detailed timeline surrounding the events and the people involved in the gun-walking program which leaves this author with absolutely no doubt that the purpose of the Operation was to justify a so-called “assault weapons ban.”

In the wake of the revelation that Joaquin “El Chapo” Guzman was in possession of a .50-caliber rifle (that can “take down a helicopter“), a reminder is in order about the true nature of Operation Fast and Furious.

I cannot begin to think of how the risk of letting guns fall into the hands of known criminals could possibly advance any legitimate law enforcement interest. – ATF agent John Dodson

“I’m not going to comment on the current investigation…As soon as the investigation is complete, appropriate action will be taken.” – President Obama

In the wake of a court order demanding that the Department of Justice release documents previously withheld regarding the Operation Fast and Furious scandal to Judicial Watch by Oct. 22, Attorney General Eric Holder’s resignation is suspiciously-timed, to say the least. 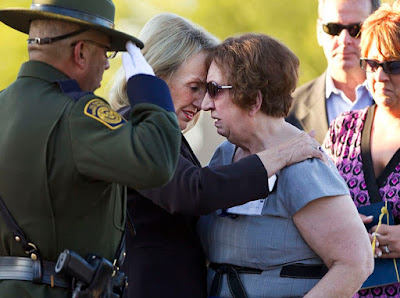 Arizona Gov. Jan Brewer (left) hugs Josephine Terry, the mother of fallen U.S. Border Agent Brian Terry (Photo by Rob Schumacher/The Arizona Republic)
While ABC news reported that Holder “has been discussing his plans with President Obama for months,” it is somewhat revealing that a potential replacement has not yet been announced, adding to speculation that Holder is high-tailing it out of the Obama Administration before damning information is revealed.

It will not be difficult to push through a new nominee, as Senate Majority Leader Harry Reid took away the voice of the minority in the Senate in November when he flip-flopped from his 2005 position on the “nuclear option” (Reid previously said that invoking the nuclear option would “ruin our country.”)

Eric Holder, who has been with the Justice Department for 26 years, is the only attorney general in U.S. history to be held in contempt of Congress.

For those who have not paid much attention to Operation Fast and Furious, a tutorial is in order. It should be noted that without the vigilance of the New Media, there is little doubt that Americans would never have been informed of this scandal, like so many others under President Obama. In fact, without the diligent work of National Gun Rights Examiner David Codrea, it is likely that the scandal would never have received Congressional attention.

The ill-conceived Operation Fast and Furious – conducted by the Bureau of Alcohol, Tobacco, Firearms and Explosives (ATF) – resulted in the loss of about 2,000 guns that ended up in the hands of Mexican drug cartels. One of those guns was used to kill border patrol agent Brian Terry, Immigration and Customs agent Jaime Zapata (from yet another gunwalking operation), and gravely wounding his partner Victor Avila. Former Mexican attorney general Victor Humberto Benítez Treviño estimated that 300 Mexicans were killed by these weapons in 2011, and certainly many more since, such as here, here and here.

It is still unknown who authorized Operation Fast and Furious.

Timeline (not all inclusive)

Aside from the New Media, little coverage was given to the operation – as illustrated in a report from the Media Research Center. The only time the Fast and Furious scandal was grudgingly reported was when President Obama invoked “executive privilege.” As an aside, Obama criticized George Bush for “hiding” behind executive privilege.

You know, there’s been a tendency on the part of this [Bush] administration to — to try to hide behind executive privilege every time there’s something a little shaky that’s taking place.

After countless hours of research, this author can see no way that the Obama administration can get around the undeniable truth about this operation: It had nothing to do with stemming violence (in fact, violence seems to have been expected), and everything to do with ultimately justifying an “assault weapons” ban. Please excuse the commentary, but there is one very easy way to all but halt gun smuggling, as well as the stem the flow of drugs into the United States: Seal the border. It should also be noted that Mexico has extreme gun control and a very high murder rate. Few of those murders are solved.

If Mexican citizens were given the tools to protect themselves, this author has a feeling that the drug cartels would lose much of their impact. But for activist groups, such as Amnesty International and many others, the effort is back in swing to convince Mexicans that the solution is an “assault weapons” ban in the United States, as illustrated by an initiative described here (in Spanish) that was advertised by the hashtag #AdiosALasArmas. As translated from Spanish, this sentence from the petition manages to vilify the United States and call for gun control in America at the same time:

An excellent timeline with additional information, as well as comprehensive information about media coverage on Operation Fast and Furious, can be found here. Big takeaway? If not for the New Media, this scandal would have likely faded into the background.

For revealing insight into the government mentality just before Operation Fast and Furious began, watch this Judicial hearing from March, 2009 (transcript here):