"THERE IS NO WAY THAT THEY WALK AWAY FROM THIS": Hillary Will Be Indicted Says Former U.S. Attorney

“The [FBI] has so much information about criminal conduct by her and her staff that there is no way that they walk away from this,” Joseph diGenova, formerly the District of Columbia’s U.S. Attorney, told Laura Ingraham in a Tuesday radio interview. “They are going to make a recommendation that people be charged and then Loretta Lynch is going to have the decision of a lifetime.

“I believe that the evidence that the FBI is compiling will be so compelling that, unless [Lynch] agrees to the charges, there will be a massive revolt inside the FBI, which she will not be able to survive as an attorney general. It will be like Watergate. It will be unbelievable.” 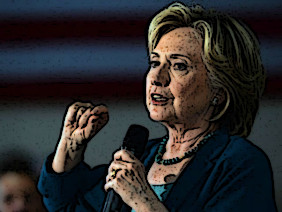 DiGenova is well-sourced throughout the law enforcement community and his assessment has to be taken seriously. But interviews with other knowledgeable Washington insiders present a somewhat less concrete scenario developing around the former secretary of state.

At the center of Clinton’s difficulties is her use of a private email account and a home-brew server located in her New York home to conduct official business while serving as America’s chief diplomat between 2009 and 2013. Several of her closest aides also used the private server.

Clinton clearly didn’t abide by federal regulations requiring officials like her to use government computers and email accounts to conduct official business and take all of the necessary steps to preserve all such correspondence concerning official business.

As first reported by The Daily Caller News Foundation, Clinton emailed Center for American Progress President Neera Tanden Sept. 7, 2010, asking for advice on what she, President Barack Obama and Democratic campaign officials should do to prevent a Republican victory in the upcoming congressional elections.

“Do you and CAP have any ideas as to how to change the dynamic before it’s too late? Losing the House would be a disaster in every way,” Clinton told Tanden. The CAP chief responded at length with clearly partisan recommendations, noted her supposedly non-partisan think tank’s polling efforts to identify winning themes for Democrats and described her conversations relaying her advice to Obama and other senior White House officials.

On its face, the Sept. 7 Clinton email appears to be a violation of the Hatch Act, which bars partisan political activities by officials using government property while on official duty. But Clinton found a clever way to get around the law, according to a senior non-profit official with extensive experience investigating such activities. The official spoke on condition of anonymity.

First, that official said, by not preserving her email records until after she resigned as secretary of state, Clinton avoided an investigation by the Office of Special Counsel (OSC), which handles Hatch Act violations. The reason is simple — OSC has no authority over former federal employees in Hatch Act matters.

Second, by refusing to comply “with Federal Records Act requirements to use an approved system for preserving records, [Clinton] arguably did not engage in political activities while on official duty or while using federal resources because she communicated with a personal computer,” the official said.

But Clinton is far from out of the woods, according to a congressional source who is deeply involved in the multiple investigations of Clinton. This source, who also spoke only on condition of anonymity, pointed to the hundreds of Clinton emails that contained classified information.

“Her problem is the sheer volume of emails that were deemed classified,” said this source. “Her first defense was that she didn’t send any classified information in her emails. But that claim has been clearly rendered false because so many of the emails were later marked classified.”

As the Department of State has released the Clinton emails she provided after leaving office, more than a thousand were marked classified after being reviewed prior to their public release. So what about Clinton’s subsequent distinction that she sent no information in her emails that was “marked classified” when it was sent?

“The volume matters because a reasonable person knows somebody who like the Secretary of State, who is allowed herself to classify materials, who has handled it for 25 years or more, at some point the law says you are responsible for recognizing classified material when you see it. That gets to the negligence issue,” the issue said.

Negligence is critical because Clinton signed a Non-Disclosure Agreement in 2009 regarding classified information that stated, among much else, that “Sensitive Compartmented Information involves or derives from intelligence sources or methods that is classified or is involved in a classification determination …”

Clinton and several of her closest aides must have read information “derived from intelligence sources or methods” on a daily or near-daily basis.

There is an ominous sentence buried in that agreement Clinton signed: “Nothing in this agreement constitutes a waiver by the United States of the right to prosecute me for any statutory violations.”

What if Clinton is indicted for negligence in handling classified information? DiGenova predicts a showdown within a couple of months that will put Lynch in the same hot seat that prompted Nixon to fire Cox for getting too close to the truth about Watergate.

A Republican with direct knowledge of the investigation predicted political chaos if Lynch doesn’t decide to prosecute Clinton, a chaos that “would be the gift that keeps on giving right through the election.”

With or without resignations of FBI officials to protest such a decision, there would be a blizzard of news releases from congressional GOPers condemning Lynch, followed by hearings in which both the attorney general and FBI Director James Comey would be put under oath and asked about their actions.

The article forgets that Lynch is a Quota-Baby, and will be afforded treatment that will put the blush back on the rose.

Should former Senator Webb run as an Independent, Clinton is done politically anyhow. Should Lynch not perform her duties I think would lead to the White House bringing the dog in and locking it's doors.

There is no way on earth that Hillary will be indicted. Obama will order the DOJ to drop the case and the media will provide all the necessary cover and misinformation.

IF the FBI director holds a news conference, the media either will not report it or simply ignore it totally.

Hillary is a liberal progressive and she can commit any crime whatsoever and she will be protected.

Lynch will never, ever agree to indict Clinton. It would be the end of her in the circles that pushed her to her current prominent status. She was put in place to defend: 1) The Obama Administration, and 2) the Democrat Party generally. If she should defect from those assignments, they'll see her dead -- quite possibly literally.

You all STILL misunderstand why Shrillary cannot be indicted. As SoS, she was party to ALL the major treason of the Obama Administration. For example, Fast and Furious. You do understand that the International Trafficking in Arms Regulations (ITAR) which F+F violated belongs to State? And do you REALLY think that Holder et al pulled that off WITHOUT her express concurrence? And that Holder and the Wicked Witch of Chappaqua conspired BEHIND THE BACK of the Muslim in Chief to do that treason? If so, I've got some land to sell you in South Florida. I'll be glad to take you on a tour of it at low tide.

If she is indicted, she will NOT "go quietly into the night" and take one for the team. She will instead perform a public dump. Which will destroy the Brown Clown's Administration. Lynch will not approve an indictment under ANY circumstances. And if there are any rogue prosecutors in the Department of (In)Justice with the courage to file anyway, then Obama has only one chance. Shrillary must have an "accident" before she is brought to trial. But Valerie and the REST of the shrews running this Politburo had better understand that ONE chance is all they get. And if she survives, then it will be time for Friends of Bill (FOB). And while that is their "name", I hope you understand who wears the pants in that family. And it sure ain't Slick. And THEY do not miss. Just ask Vince Foster. And the many other dead men who tell no tales.

By the way, F+F was only ONE of the many such operations run by BATFE. If you check out the audio recording of BATFE Agent Hope McAllister - made without her knowledge by one of the FFLs she ordered to sell weapons to straw buyers - she admits that there were THREE guns found at the scene of Border Patrol Agent Brian Terry's murder. Two of them were sold by that FFL under her order. The THIRD was sold in Dallas, but pointed back at an FBI "employee" so it disappeared. Just as the front door from the Branch Davidian compound disappeared after the FBI took possession. Now I'm not sure how good you are at geography, but Dallas is not in the area of responsibility of BATFE's Phoenix Field Division that was running F+F. It is, however, on the front porch of their Dallas Field Division. Now there are ?25? BATFE Field Divisions across this country, and smart money says EVERY ONE OF THEM had their own version of F+F. My "local" BATFE Field Division in Central Florida is in Tampa. Their version was Operation Castaway, running weapons to Communist terrorists in Honduras, with the help of my own Brevard County Sheriff's Office, the Orange County Sheriff's Office, the Osceola County Sheriff's Office, and the Miami-Dade Police Department. Congressman Gus Bilirakis of Florida's Twelfth Congressional District heard of that operation in July of 2011 and asked for an accounting. It is now January of 2016 and he STILL has not gotten that. But the Brevard County Sheriff's Office and the Tampa Field Division of BATFE sure were busy shredding documents and deleting files as soon as they heard of his request.

Are you REALLY foolish enough to believe that FBI agents are honest and honorable enough to do ANYTHING no matter how corrupt the government proves itself to be???