By Colin A. Hanna

There he goes again. President Obama is shamelessly, cynically and hypocritically exploiting a mass shooting to advance his gun control agenda. The executive actions he proposed recently would have had no preventive impact whatsoever on the San Bernardino incident had they been in place a month ago, yet he is skillfully exploiting that tragedy to reframe the debate. He is trying to shift our national focus away from a rigorous examination of what motivates mass shooters, which is where it should be, to support for a new set of restrictions on gun ownership and expansions of background checks, under the banner of “common sense.”

In his news conference, he again employed his favorite rhetorical device – the strawman argument – saying that he was not trying “to take everyone’s guns away,” when what he is really attempting is to impose new restrictions on guns by executive fiat rather than by proposing legislative action. Thoughtful citizens should not allow themselves to be drawn into a discussion of his specific proposals. We should instead expose the president’s underlying agenda, which is to undermine the Second Amendment by casting it as an anachronism that is no longer relevant to a twenty-first century America.

As much as Americans are distrustful of politicians as a class, they reserve an even greater disdain for a president who bypasses the Constitution and rules by executive fiat. Obama’s executive amnesty program, his creation of “czars” in the White House, his decision to enter into trade deals and nuclear arms treaties while denying that they are treaties, taken together, amount to an unprecedented abuse of executive authority. The former Constitutional lecturer in the White House is in fact a Constitutional revisionist. 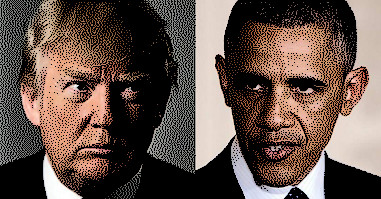 Even the national media have bemoaned Obama’s refusal to work with Congress, instead deciding to make up his own rules as well as his own laws. The president’s job is to “faithfully execute” those laws, not usurp Congress’ authority to legislate.

Americans who are angry and frustrated with what they see as dysfunction in Washington naturally look at the candidates to be the next president. Will they halt the abuse of office in full display today by the current administration? Will the leading Republican candidate, an egotist who puts his name in 20-foot letters above his buildings, be inclined to abide by the limitations of the original intent of the Constitution, or is he more likely to adopt a still more expansive view of executive authority than Obama?

Donald Trump, who has never worked for anyone and thus has not been accountable to anyone, prides himself on how he’s been a clever and successful independent business owner. Has anyone ever told him “no?” Can a person who has never felt the need to ask for forgiveness be held back by constraints of something as old as the Constitution? It’s unlikely, as he has cut his own path in every industry he has worked. Will he be constrained by the balance of power that lies at the heart of the Constitution’s design of the federal government?

Many who think they agree with Trump today may not do so if he takes office and begins wielding power. He has changed his position on several major issues over the years. He was pro-choice, and now he says he’s pro-life. He supported and gave money to Bill and Hillary Clinton, and now he’s criticizing them and their views. He supports the confiscation of private property by eminent domain. Someone who has no record in office is a gamble. What issues would he advocate once elected?

The beauty of the American system of governance is that power is divided among three branches of government, with a set of checks and balances. No one person or group of persons should be able to acquire too much authority. We once had a king, and we fought a war to rid ourselves of that kind of absolute power. Obama is already too far from the Framers’ ideal of limited government and the balance of powers. Should he be succeeded by someone who is likely to abuse executive power to an even greater degree? Let’s see through the president’s executive action proposal this week. It is fundamentally a threat to the Constitutional order of the federal government, rather than a modest effort by the president to reduce mass shootings.

"a rigorous examination of what motivates mass shooters, which is where it should be"

that is a ridiculous as obamas actions , as it has nothing to do with mohammedan terrorists

Remind me again who Ted Cruz's wife works for? And who are the donors to his campaign, obviously they're all 100% for the Constitution, right? Funny how they're never mentioned, isn't it.

Oh, and while you're at it, could you please tell me how the TPP is good for Americans? And how massively increasing H1B visas will help ordinary Americans get jobs? I'm still having trouble understanding why Ted Cruz is supporting these things, and others that he doesn't mention much. Thanks!