While No One Was Watching, Obama Took Control of the Courts

The New York Times wrote in 2014, “Democrats have reversed the partisan imbalance on the federal appeals courts that long favored conservatives, a little-noticed shift with far-reaching consequences for the law and President Obama’s legacy.”

It didn’t favor conservatives but there was a dramatic shift to the far left.

The appellate is under the control of leftists and ACLU types. They own the Court of Appeals.

As he has done by ignoring Congress and the Supreme Court of the United States, Obama has been eliminating voices not his own. He has been erasing the Separation of Powers and our Constitution. He has been obliterating states rights.The judicial branch was also on the agenda.

This is part of Mr. Obama’s fundamental transformation. 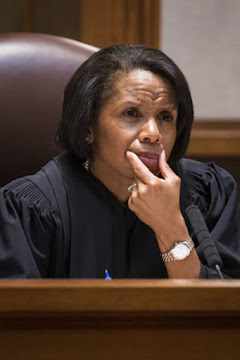 The Senate gave Mr. Obama almost limitless power to appoint anyone he wants to the courts when they invoked the nuclear option and assigned that power to him with only 51 senate votes instead of 60. They appointed judges for jobs that didn’t even exist so they could stuff the courts with leftists.

The nuclear option turned over 225 years of precedent and gave free rein to President Obama to fulfill his promise of to take over the federal courts.

If a Democrat wins in November, he or she will have the opportunity to fill the Supreme Court with lifetime appointments for one to four left-wing ideologues.

The courts regulate business and individual rights and can regulate them into oblivion. The regulatory process is reviewed by the DC Court of Appeals.

Obama won election races throughout the country on judicial decisions by leftists.

Because of the nuclear option, radical leftists like Goodwin Liu and Cornelia Pillard now comprise the majority of the courts.

It is Obama’s legacy.

Mr. Obama addressed the DSCC in Dallas, Texas on November 6th, 2013 and in his comments he made this stunning pronouncement – he is remaking the courts.

He began by insulting Congress to explain his tendency to rule by Fiat:

And I was talking to Michael as we were flying over here about the frustrations and challenges that we’ve experienced in Congress. […]


And Texas was a big beneficiary of his leftist largesse:

As Lisa mentioned, we are remaking the courts. I know that we’ve got some lawyers here, and here in Texas sometimes people feel a little frustrated about the pace of appointments here in Texas. But you should know that in addition to the Supreme Court, we’ve been able to nominate and confirm judges of extraordinary quality all across the country on federal benches. We’re actually, when it comes to the district court, matching the pace of previous Presidents. When it comes to the appellate court, we’re just a little bit behind, and we’re just going to keep on focused on it.

A majority of appointees on the federal district and circuit courts are now Democratic appointees and Progressives.

In the last month alone, the Senate has confirmed 22 judicial nominees. Although Republicans have continued to use procedural maneuvers and Senate rules to slow down the confirmation rules or quietly block nominees, without the 60-vote threshold for a confirmation vote judges have had a much easier time getting confirmed.

Obama appointed about 40% of the judges to the courts.

Wright once accused the Reagan administration of “bigotry” in her writing for the prestigious UCLA Law Review in 1989.

In her third year of law school, she wrote about white families fleeing the cities for the suburbs:

Their mad scramble is aided by a Chief Justice who owned racially restrictive property and a Presidential administration that believes bigotry, poverty, and poor educational opportunities for most public school students are the unavoidable fruits of a ‘thriving’ free market economy.

In the same law review, but while addressing a different topic, Wright wrote that “the sanctity of property and the belief in the hierarchy of races” undergird racism in America.

You can find out more about this judge at The Daily Signal.

Reember how Pelosi screamed about W, and how many of his appointents sat on shelves? And how they set Alberto on fire? The next President can undo this, as well as the Progressive's plans for scotus.

ps. Could you please add CC to your blogroll?

Yes, and he's also destroying state government"
By forcing every town, small city, or suburb that takes HUD money to evaluate the “fairness” of its demographic mix with reference to the demographics of the nearest mega-city, HUD can effectively institute regional government in America by fiat. If the ethnic mix of your town is substantially different than the ethnic mix of a city even 200 miles, a five-hour drive, and another state away, you will have to recruit that city’s dominant ethnicities to populate your low-income housing, so long as HUD declares you to be in that “region.”

Not to worry. A principled conservative like Donald Trump is going to expend a lot of effort and energy to rip all of these Obama appointees out root and branch, amirite?

Huh? Democrats WERE watching. Didn't care as long as they got their cut. Oh, right, I meant Republicans but then everyone here knew that.

It is the President's prerogative to dump these appointments. I would hope a man Trump would do that, as well as rescind Executive orders. Lets go a step further and expect prosecution of all the key Democratic players over the last 10 years.